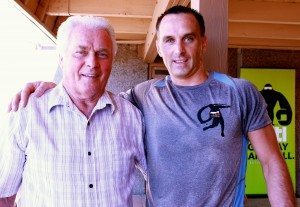 Brady advances to the Quarters; then is greeted by Irish Great, Pat Kirby

The Tucson Race 4 Eight IV Stop #2 and Junior WPH Benefit, Powered by ESPN and EDTL Handball kicked off early on Friday morning with the Pro Qualifier. Cross over stars Samzon Hernandez, Shorty Ruiz, Timbo Gonzalez, Sal Duenas, and Chava Cordova challenged the best in the sport on the outside of the Elite 8.

Track all the results, as the tourney progresses, HERE>

Cordova appeared poised to challenge the WPH #1, leading 8-6 in a frenetically paced first game. Moreno demonstrated why he is the Race’s most prolific winner, scoring 24 of the next 25 points to advance to the quarterfinals, 15-8, 15-1.

Paul Brady cruised against NorCal’s Torres, never allowing the up-and-coming pro into the match en route to the quarterfinals and his quest for the WPH #1 ranking.

Peixoto welcomed Daniel Cordova to the Race tour, thumping the first-time qualifier in two games to continue his march towards the pinnacle of the Race tour.

Vic Perez entered the event with no Race ranking, having made no Race starts in the previous 12 months. After advancing through the qualifying, Perez drew LAAC stable mate Mando Ortiz. The two battled in game one, with Ortiz edging his close friend and rival 15-13. Ortiz served for the match at 14-12 in game two, but a relentless Perez dug an Ortiz kill shot attempt and earned a side out with an incredible 34-foot right-handed rollout. Perez shocked Ortiz by scoring four consecutive points to force a tiebreaker and used his conditioning and percentage shot making to dominate the tiebreaker against an exhausted Ortiz, 15-8.

Fink and Bernhard faced one another for the first time in Bernhard’s maiden qualifier success. In a contrast of styles between a combustible lefty and the steady lawyer, the two were tied at 12 in game one. Bernhard made two crucial errors to hand Fink a 14-12 lead and Fink ended the first game with his eighth ace serve. Fink started fast in game two, building a 7-0 lead before “Bernie” tied the score at seven. Fink reassumed control, scoring the final eight points of the match to end his Race 4 Eight main draw slump.

Sean Lenning avenged his loss at the NYAC from the R48 III season against Iglesias, destroying his foe and announcing his return to top form.

Chavez and Montijo staged the longest round of 16 match of the evening, playing for one hour and 55 minutes and thrilling the pro-Montijo gallery on his home court. Montijo served for the first game at 15-14, but Chavez fought off a difficult serve and Montijo kill shot attempt to earn the side out and score three consecutive points to steal game one. Chavez raced to a 4-0 game two lead and appeared on the verge on of clinching a quarterfinal berth but Montijo rallied, coming back to force the tiebreaker. Montijo and Chavez traded the lead six times in the first half of the tiebreaker with both guys scrambling and ending rallies with incredible kill shots. Montijo surged behind his support of his home fans, dominating the second half of the tiebreaker to advance to his second ever Race quarterfinal.

In a battle of Race young guns in primetime, Selestow blitzed Cooney 15-3 in just nine minutes in game one. Cooney adjusted his game in the second, relying on fist pass shots and fist kills down the walls to even the match at a game apiece. Tied at seven in the tiebreaker, Selestow failed to return four out of five lob serves, allowing Cooney to take a comfortable 12-7 lead. Cooney capitalized on his lead, executing three kill shots to make his first Race quarterfinal. 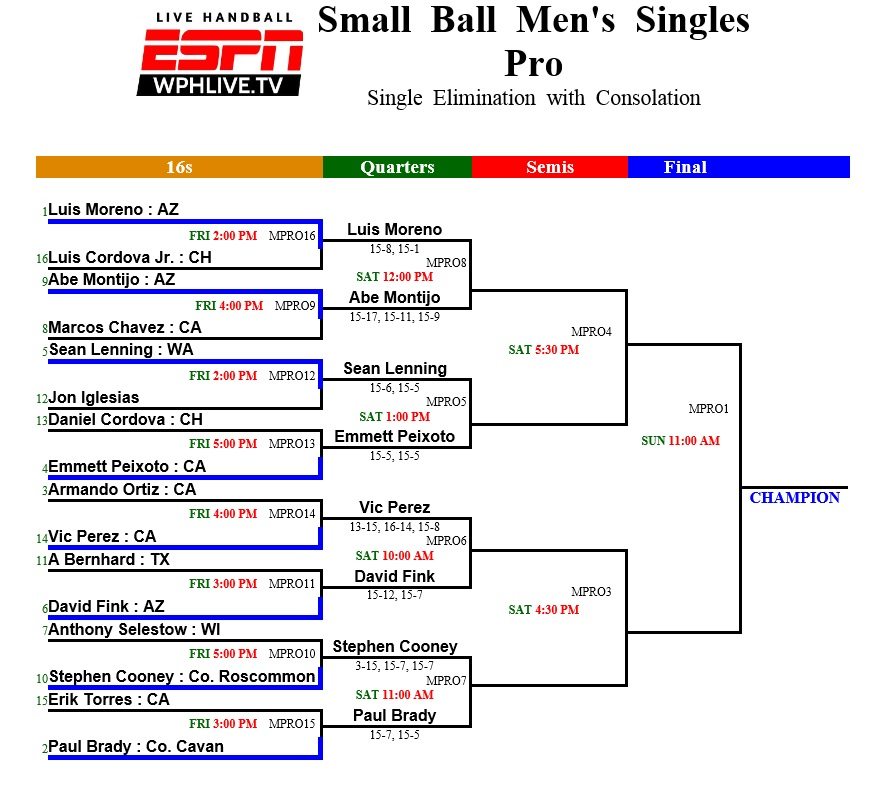 To into the Watch ESPN App at noon est/10 am mst to watch all of the Race 4 Eight quarterfinals, Senior Race 4 Eight action, and potential bonus coverage of the men’s big ball doubles and women’s pro singles.

Please consider making a tax-deductible donation today and supporting the growth of the game. 100% of the donations received by the WPH go towards junior handball development. Donate on-line at www.thehandballstore.com, send your generous gifts through PayPal (extremehandball@cs.com) or by mailing checks to: WPH, 3561 E. Sunrise Dr. Suite 125, Tucson, AZ, 85718.