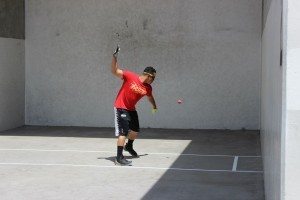 The WPH Outdoor 3-Wall Big Ball tour is proud to present the Hemborg Ford WPH Outdoor Cup Stop #3: The International Baja Blowout in Tecate, Mexico, July 18th-19th. Known for being the site of the first brewery of Tecate Beer, Tecate is located 40 miles south of San Diego with an elevation of 1,775 feet. WPH Outdoor stars will be treated to temperatures in the mid 80’s, as Tecate boasts one of the most ideal climates in Mexico for outdoor sports. When not on the court, players will have the opportunity to enjoy numerous Tecate amenities, including Parque Hidalgo, Guadalupe Hot Springs, Cave Tours and Local Wineries.

WPH Outdoor pros will be presented with a distinct challenge on Tecate’s four-court 3-Wall facility, as the unique court dimensions will largely dictate the strategy. Players will have to adjust from Venice Beach’s traditional 3-Wall long courts at Cup Stop #2 to Tecate’s 16-foot high front wall, 14-foot side walls to the short line that cut to 12-feet at the 25-foot mark and a back line that stretches to 48-feet from the front wall.

“Tecate’s courts are somewhat tricky,” stated Baja Blowout tournament director Tom Flores. “The two-wall serve can be very effective, as well as strong passing shots. The best available shot is the deep lob. The lob forces the returner to guess and sets up the kill.”

“These courts will force players to do a lot of running,” stated WPH Outdoor star and top-four Baja Blowout seed Sal Duenas. “I don’t think the court favors any one type of player and will require supreme ball control.”