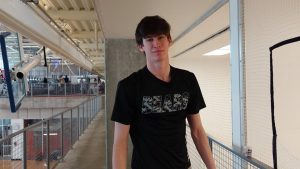 Szatkowski cruised to the final by ousting fellow Chicagoan Charlie Lemus, while Kansas’ 6’8 “Gentle Giant” battled Chi-Town veteran Bill Mehilos for a spot in the final in the bottom bracket. Despite playing very little 3-Wall, the tallest pro in the history of handball has quickly adapted to the outdoor game. “Max is a very strong player outdoors and he knows how to use his height,” stated 3-time 3WallBall singles champion Shorty Ruiz, who defeated Langmack in a close tiebreaker at the KCAC last month.

Mehilos took game one against Langmack, using his 3-Wall experience and shot making to keep Kansas’ top star off-balance. “Bill was pretty much dominating the first game,” stated Langmack. “He had the power and the reverse and the touch to hit 40-45 foot side wall kills that would just die in the front before I could get there.”

Langmack changed the momentum in game two, locating his serve and kills and scoring the important points late in the game. “I made some adjustments in the second and started to find my serve, which kept him off balance and let me get out to a 14-9 lead, though he kept battling with a lot of side outs,” stated Langmack. “I pulled ahead to an 18-15 lead but Bill came roaring back with an out the door serve to the left before I managed to get a side out with a diving kill and then a serve down the right to close out the game.”

The tiebreaker could not have been closer, as the veteran and the youngster traded the lead six times before arriving at 10-10. “The tiebreaker could’ve gone either way,” stated Langmack. “I jumped out to an early lead before Bill started pushing me back with drives and fly kills. I got back in and found some out the door drives that let me finish out the game.” Langmack fought off match point and won the match on his first match point, 11-10.

“Just not enough juice,” lamented Mehilos. “Max is a very nice player and real strong in the front court.”

The final pitted 3-Wall legend, “The Great Dane,” against handball’s most heralded newcomer. Szatkowski overwhelmed Langmack in game one, never allowing the youngster into the front court. “Max struggled with Danes serve in the first game,” stated Mehilos.

Just as he had done in the semifinals, Langmack worked his way into the match. “Dane’s hop serves weren’t as sharp in the second and it allowed me room to start taking control of the front court and hitting passes down the line that served both offensive and defensive purposes,” stated Langmack. “I started to warm up and find my touch as well, which helped on some corner kills.”

Langmack found himself in his second consecutive thrilling tiebreaker, as the Midwest stars traded great shots until the final swing. “The tiebreaker was really intense,” stated Langmack. “Dane found his hop again and jumped out to a 4-0 lead. I fought back with some long rallies and gets to stay alive, hitting some good low power serves to get some aces and pull ahead 7-4. We traded points to 9-10 with Dane in the lead but I hit a corner fly that gave me the serve. I cracked one out down the right that tied it at 10, before a rally that led to me hitting the deck and having to stay down, giving Dane the opportunity to drive the ball and win the rally. He served for the match and I managed to return it, and we traded drives and ceilings before one of my balls clipped the side wall on the right and gave him a 3/4 court opportunity, which he put down just out of reach straight down the right with a straight kill.” 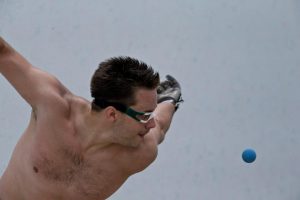 Photo of Dane Szatkowski courtesy of the Illinois Handball Association. Thank you to Max Langmack and Bill Mehilos for the recaps.

To follow all of the brackets and results from the 29th Annual LaGrange 3-Wall Open, go HERE