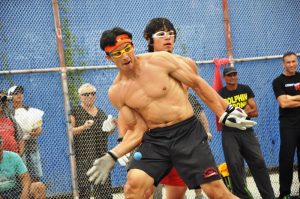 Jurell Bastidas entered the 2018 Speaker’s Cup as the defending champion but would need to overcome a talented draw that included Tyree Bastidas, Cesar Sala, and rising star Steven Woo to repeat in Manhattan.

Jurell advanced to the semifinal of the one-day Speaker’s Cup by defeating Adam Gittlitz in the quarterfinals, setting up a showdown with Steven Woo. Jurell would face a stern test in his semifinal clash with Woo, as Woo matched Jurell shot for shot throughout the match. “There was a lot of hard-hitting volleys and great serves by both,” stated WPH reporter James Flaherty. Jurell would pull away from Woo late in the one-game match to book his spot in the final and a chance at a Speaker’s Cup repeat.

Tyree Bastidas was aiming to reassert his 1-Wall dominance in the bottom bracket after a disappointing 2017, by his lofty standards. Tyree ousted WPH reporter James Flaherty in the quarterfinals to face 1-Wall legend Cesar Sala in the semifinals. Sala turned back the clock on his Tyree, demonstrating his outstanding skills and determination to push the multiple-time 1-Wall national champion to the limit. “There were a lot of great shots, diving gets, and a number of long volleys,” stated Flaherty. Tyree advanced, making clutch shots late in the game to setup a clash with his brother in the final.

Jurell started quickly in the final, using his lethal serve and power while taking advantage of several Tyree errors to build a 22-12 lead in the one-game final to 25. Tyree roared back, eventually eliminating the deficit with steady handball. “Tyree made a change (after trailing 12-22), playing a little more safe but continuing to hit with power and just kept scoring,” reported Flaherty. “Both Tyree and Jurell were hitting the ball very hard and consistently throughout the match, but it was Tyree that was able to complete the improbable comeback to take the title.”

Thank you to WPH 1-Wall reporter James Flaherty for the updates from Manhattan.

Photo of Tyree Bastidas and Jurrell Bastidas courtesy of Bill Fand at tyreebastidas.com,

To follow all of the brackets and results from the 2018 Speaker’s Cup, go HERE