The WPH is thrilled to continue The Coaching Center, hosted by world-renowned sports instructor Boak Ferris. Mr. Ferris has worked with elite athletes in amateur and professional sports, to include but not limited to handball, tennis, baseball, volleyball and water polo. Mr. Ferris not only addresses proper techniques, body mechanics and strategy, but also sports psychology, cognitive psychology, analytical skills, and lifestyle issues. Mr. Ferris will host a number of segments in The Coaching Center, explaining and exploring the complexities of handball and how handball connects with other sports. This week’s Coaching Center will explore what enabled David Chapman to become the youngest pro national singles champion and #1 ranked pro. 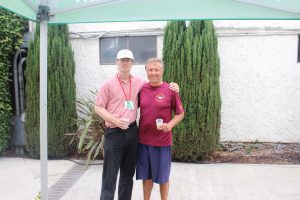 Alongside Lew Morales and Fred Chapman, you were a member of David Chapman’s coaching team in the late 1980’s and early 1990’s. What did David’s team teach him as a 10-15 year-old that enabled him to become the youngest national champion and youngest to reach number one in history?

I’ve thought long and hard on this.  And the answers to this question relate to question 1.  By age 3, David wanted to play handball great, to copy his dad, whom he loved, so he had a natural love of the sport, via his dad.  He never ever lost that love.  He also loved dominating whoever competed against him.

Next, all four-wall handball players first assume that they have a total of six walls to use to direct the ball, if counting the floor.  Chapman, however, learned by age 5, about a seventh wall: his body.  Lew and his dad taught him early on to exploit the position of his body as a weapon to disguise, screen, and delay his shots, while using it to buy time to open a free path back to center—priority one.  Any adult who played kid Chapman, aged 6 through 16, learned quickly, that the kid pushed you around his body, and was fearless that you would run into him or over him, you being a big man, and him a little kid.  You can find online videos where adult men, losing, run into him, to intimidate, and he just brushes it off.  Phenomenal.  Every single adult who played him said, “This kid is just enough, always in the way, (or else blocking your best return).”  Similarly, Naty Sr. hovered over all his opponents’ setup-lines.  These tactics are well within the handball rules, and this key understanding gave Chapman court-general control at a very young age.  You can hear how Naty Sr. understands David’s dominance in his remarkable commentary on David’s win over Ducksy Walsh at the 1994 Worlds.  And, by the way, when you are controlling your opponent around the court you never get tired.  You are having too much fun to get tired.  Ducksy is clearly exhausted with frustration, while David merrily hums along.  Thank you David’s Dad, and Lew Morales!

Next in importance, David learned from his dad, Fred, who was a great reader of the canonized Eastern Martial Arts tomes, what all kendo artists must learn.  How to answer and address hard power—with interruption and soft redirection.  David’s only weakness when he was small and slow was how to return a power shot.  To accomplish this, David learned how to “decompress the ball” as Fred termed it, a term common to senior players.  Lew called it instead the “elastic-arm,” which is how David and I referred to it, so eavesdroppers would have no clue about our tactics.  It starts with moving your feet early, as do all great biomechanics.  First, move your body to partly-block or line up on (interrupt) the power-hitter’s best winning shot-line.  Next, lift your arm, keep it “loose” and soft from the shoulder, while gliding quickly, if necessary, over to the power-hitter’s intended second-shot line.  Calculate the bounce point on the floor, then get your relaxed palm behind the ball, and “let” the ball’s power push your arm into the soft shoulder and push the arm back, and then redirect the force to roll your shoulder down, back, and then loop the arm forward toward the front wall.  Roll the ball through your hand, and aim it back to where the power hitter just came from.  Or else you can redirect it, keeping the ball in your palm a bit longer and cradled under your shoulder.  Over time, David learned how to rekill, using this elastic arm, and also how to paddle it with amazing consistency.

Two players today practice their (self-taught?) versions of the ‘elastic arm’, and are really really good at it: Casey and Carroll.  Casey uses it to beat everybody, since she doesn’t have the obvious power of the taller women.  But her early feet, and her high, prepared, elastic arm absorbs the oncoming power and then she redirects the ball with a smooth “arm-loop” (and hip-turn) with incredible accuracy.  Carroll used a similar technique to interrupt and smoothly rekill Brady’s blazing power shots in 2017 in the Nationals Finals, one of the keys to his victory.  To interrupt, Carroll often moved his feet early onto Brady’s predictable line while Brady was still finishing his front step, sometimes at risk of an avoidable—but Killian’s timing was very good, and he closed out his game-plan for that opponent that day.

When Boak grew up overseas, Boak’s dad insisted he learn martial arts while attending boarding schools, and so Boak studied Boxing (his dad’s sport), Aikido, and a bit of Kendo over a period of twelve years. He also competed at tennis, golf, soccer, swimming, and handball between elementary school, and then in High School competed at Handball and Track.  Moving forward in time, in 1989, Boak first befriended David Chapman, without involvement in any coaching.  In 1991, Boak was recruited as a faculty mentor into CSULB’s TEAMWIN project to help university athletes excel in sports and academics.  Among his university clients, he coached various members of the university’s tennis, water-polo, and volleyball teams, as the university directed to him, about 16 in all, including  James Cotton in basketball and Jered Weaver in baseball—both of whom enrolled in Boak’s courses.  Among his topics of engagement, he included sports psychology, cognitive psychology, analytical skills, and lifestyle issues.  The TEAMWIN project, though successful, lapsed as a result of a loss of funding, about 1995.  Around 1991, Boak also engaged in contributing coaching tips to Steffi Graf’s team and agency, while also joining David Chapman’s team as a bona-fide coach.  He traveled on and off with David’s team until about the year 2000, at which point David’s travel schedule became too hectic for Boak, who had since been promoted to Coordinator of Graduate-Required Testing and Evaluation of CSULB students.  Today, he is a number-two ranked handball competitor in the USHA Veteran Super Masters Division, and has six handball clients, ranging from 16 up to 70 years of age.