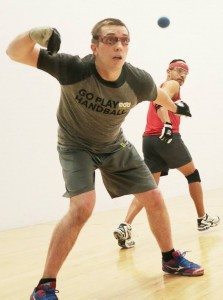 The 6th Annual John Gaffney Memorial kicks off this Friday, January 9th, 2015, in Ballaghaderreen, Ireland. The men’s top Irish stars on the GAA Ireland Official Senior Player Rankings will be competing for official ranking points in the first event on the Irish Clar in 2015. The Gaffney will also feature playoff matches to award individual points, similar to the WPH Race 4 Eight Playoffs.

Former WPH Race 4 Eight finalist Diarmaid Nash enters the event as the number one ranked Senior Player and the number one seed in the star-studded event. Nash won the 2014 edition of the Gaffney Memorial, defeating rival Robbie McCarthy in the final. Robbie McCarthy will aim to continue his stellar 2014 form that produced his first All Ireland Senior 40×20 Singles Championship and WPH Race 4 Eight Player’s Championship. McCarthy dropped a scintillating 11-10 tiebreaker in the semifinals of the Irish Nationals two months ago to Killian Carroll, and could face the 21-year-old superstar in Gaffney’s semifinal. Killian Carroll enters the 2014 Gaffney Memorial as the hottest player in Ireland, on the heels of consecutive ranking event victories at the 2014 Golden Gloves and the 2014 Irish Nationals.

“The young Cork man is absolutely spectacular to watch, with sensational speed and retrieval skills, who pushes his body to the limit every time he steps on the court,” declared GAA Handball in reference to Killian Carroll. “Who knows what 2015 has in store for Killian!”

Brian Carroll, Martin Mulkerrins, Joe McCann, Michael Finnegan, and Brendan Fleming round out the rest of the top eight seeds, with dangerous floaters Charly Shanks and Eoin Kennedy lurking in the draw.

“It’s hard to tell what to expect in this event, as it’s the first event of 2015,” revealed 5th ranked Senior Star Martin Mulkerrins. “Killian and Diarmaid have played in the finals of the Golden Gloves and the Irish Nationals, but I’m sure there will be quite a few players quietly confident in causing an upset this weekend. It should be interesting.”

“The Gaffney Memorial looks to be as competitive as ever, with all players seeing it as an important stepping-stone for the All-Ireland Championship to follow,” revealed Women’s Race 4 Eight #1 Catriona Casey. “Spectators could be in for another entertaining clash between Killian and Robbie in one semi and if I had to call it, I would expect the winner of this tie to take the title. On the top half of the draw, I’m sure Diarmaid will go about his business in his typically composed fashion but I could see Charlie causing an upset and reaching the final, particularly if he repeats his US Open form in which he defeated Lenning, Peixoto, and pushed Brady all the way. It will definitely be hard-fought and a great weekend of handball action.”