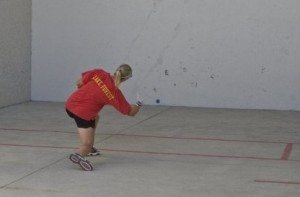 Megan Dorneker has been the most dominant women’s 3-Wall star since the turn of the century, collecting eight national 3-Wall titles between 2005-2013. Dorneker aimed to win her unprecedented ninth and her first as a mom at the 2015 USHA National Three-Wall Championships.

Dorneker cruised to the final with a straight sets victory over Leah Kirk, while Ireland’s Hilary Rushe was awarded a forfeit in the semifinals when Robin Sterret was unable to play due to injury.

Dorneker and Rushe met at the 3-Wall National Championships for the second consecutive year, with Dorneker winning their 2014 quarterfinal encounter in two games. The 2015 rematch was no different, as Dorneker imposed her dominant 3-Wall game on her younger Irish counterpart, winning her first 3-Wall Championship as a mom and her ninth overall, proving that Mom’s Rule! Congratulations to Megan!

To follow all of the divisions and scores from the 2015 USHA National Three-Wall Championships, click here. For all of the news from the world of handball, go to wphlive.tv.