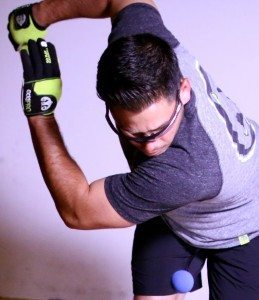 With the R48, SR48 and WR48 Player’s Championships on the line, the action was intense at Salt Lake City’s Sports Mall. Players on all three Race tours were playing for season-ending bonus money, as well as the chance to be recognized amongst the elite of professional handball.

Daniel Cordova continued his impressive R48 rookie season, advancing to his first R48 semifinal by defeating New York’s Mike Schneider. Sean Lenning was on fire on his 30th birthday, defeating David Fink in two games in his quarterfinal. Lenning needed just 26 minutes to defeat Cordova in Saturday evening’s first semifinal to advance to his second R48 IV final. “I just felt really good and happy in there,” revealed Lenning. “Danny is a good friend of mine and I feel comfortable and relaxed playing him.”

Luis Moreno overcame a slow start against a flu-striken Naty Alvarado, relying on his devastating serve to bail him out in the second and third games. Mando Ortiz stunned WPH #3 Emmett Peixoto, shooting the lights out in both games to advance to his first R48 IV semifinal. Mando Ortiz blitzed Luis Moreno in game one and held off a Moreno charge in game two to advance to his second Race 4 Eight final. “I just play my game, serve and shoot,” revealed Mando. “That’s my strategy. Tomorrow I just need to maintain the pressure against Sean (in the final).

Catriona Casey cruised to the semifinals with a flawless performance against Ashley Moler in the round of 8. Danielle Daskalakis faced her mentor, Tracy Davis, in her quarterfinal match. Daskalakis dropped game one but easily clinched the second and third games to setup a rematch of her semifinal match with Casey from the WR48 II San Francisco. Just as she had done in San Francisco, Casey easily dispatched of Daskalakis in two games to advance to her seventh WR48 final in seven starts.

Aisling Reilly needed just 12 minutes to defeat Yvonne August in her quarterfinal match, while Martina McMahon overcame a first game struggle against Jessica Gawley to advance to her second consecutive WR48 semifinal. McMahon won her first game in her rivalry with Reilly in their semifinal, clinching game one 15-12. Reilly regrouped in game two, asserting her power game and experience against her younger adversary to force a tiebreaker. Reilly built a comfortable lead in the tiebreaker and held off a late charge from McMahon to setup a clash with Casey in the WR48 Player’s Championship final for the second consecutive year. “We play polar opposite styles,” revealed Reilly in reference to her rivalry with Casey. “She (Casey) plays percentage handball and I go for my shots.”

SR48 #1 Andy Schad defeated Salt Lake City’s Gary Scogin to advance to the semifinals, while Ireland’s Tom Sheridan outlasted Chris Watkins to advance to his first SR48 semifinal. In the top bracket semifinals, Schad and Sheridan battled to a 21-21 tie after 11 lead changes and 85 minutes. Schad landed awkwardly on the seventh shot of the rally at 21-all, appearing to strain his Achilles. A 15-minute injury timeout did little for Schad, and Sheridan quickly scored the final four points of the match to clinch his spot in the final.

Sunday’s action will be broadcasted live on the Watch ESPN App http://es.pn/1CBapCU. Coverage starts at 11 am est, Don’t miss a point from the best men’s, women’s and senior players in the world!