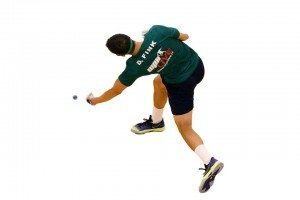 Friday kicked off the R48 Qualifier, WR48, SR48 and R48 main draws at the Sports Mall in Salt Lake City, home of the WPH Aces Player’s Championship. R48 stars have competed all season from San Francisco to New York City for the opportunity to finish in the R48 Elite 8, WR48 Fab 4 and R48 Fab 4. Friday’s play would determine who was still alive for a shot at R48 immortality and who would have to wait until next season.

Five-time R48 IV champion Paul Brady was forced to forfeit his opening round with a quad tear against New York’s Mike Schneider. “I hurt the quad five days ago in a Senior Doubles final in Ireland and I could feel it starting to grab,” revealed Brady.  Daniel Cordova sealed his spot in the R48 IV’s Elite 8 with a convincing victory against Stephen Cooney to setup a quarterfinal clash with Mike Schneider.

Emmett Peixoto dismantled five-time R48 IV qualifier Anthony Selestow in his opening round match to setup a quarterfinal clash Mando Ortiz. Ortiz overcame a sluggish start against Luis Cordova to score 30 of the final 35 points of the match.

How can you watch?

Saturday’s action will be broadcasted live on the Watch ESPN App http://espn.go.com/watchespn/. Coverage starts at 10 am est, Don’t miss a point from the best men’s, women’s and senior players in the world!