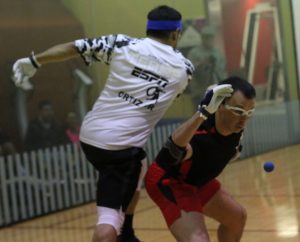 The R48 V’s final regular season event featured the best players on the R48 tour vying for valuable ranking points in advance of Portland’s R48 V Player’s Championship in May.

Sean Lenning rebounded from a disappointing finish at the New York Athletic Club to defeat his Tucson rival David Fink in two games in the opening R48 quarterfinal of the day. Jonathan Iglesias advanced to his first R48 semifinal in 22 R48 starts, defeating his former college roommate Vic Perez in two games. Mando Ortiz continued his superb play in Salt Lake City, advancing to the semifinals for the third consecutive year with a two-game sweep against Daniel Cordova. Paul Brady overcame a slow start to win game one against Emmett Peixoto but fell behind 1-11 in game two. Peixoto appeared to be in cruise control and poised to force a deciding third game, but buoyed by several extensive time delays, an irate Brady scored 14 of the final 15 points of the match to advance. 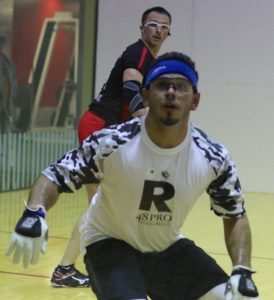 Paul Brady faced Mando Ortiz for the fourth time this season, with Brady winning two of the first three. Brady raced to an 8-0 lead in game one in just five minutes and appeared to be on the verge of a route. Ortiz scored five of the next six points to grab Brady’s attention, but his comeback came up short, as Brady clinched a one-game lead, 15-10. Ortiz raced to a 7-2 lead in game two before Brady caught fire, scoring 10 consecutive points to take charge. Brady held off a late Ortiz rally to defeat the R48 #3 for the third time this season.

Luis Cordova survived a near collapse in the first round of the 9th place playoffs against Peter Funchion and advanced to the 9th place final with a victory against Marcos Chavez, while Luis Moreno dominated Killian Carroll and Billy O’Donnell to meet Cordova in the final. David Fink defeated Vic Perez and Emmett Peixoto defeated Daniel Cordova to setup a 5th place playoff showdown on Sunday morning. 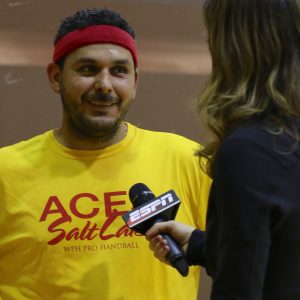