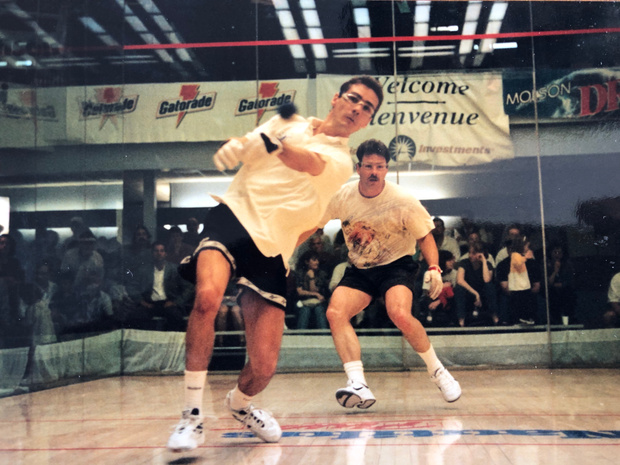 …..is a pro handball legend and a modern marvel that defies Father Time, regularly defeating professional players 40 years his junior. Bell played pro handball for more than three decades, reaching the USHA National Four Wall final at the age of 43 in 2005 and winning a pro stop 14 years prior, while remaining in the top eight for more than two decades. Bell played against and beat nearly all of the game’s greatest players from the mid 1980’s through the mid 2000’s and shares his journey in this WPH Patreon exclusive.

Danny continues to remain a threat on the handball court 35 years after making his professional handball debut, with Danny’s unique blend of dump kills, power serves, paddle kills, court savvy, and fist pumps making the Canadian legend one the most exciting players to watch and one of the most difficult to play. Bell won three open tournaments at the age of 58 in late 2019 at a time when most legendary athletes have long retired to the golf course. Danny’s fitness and passion for the game is virtually unparalleled, inspiring his peers and the next generation, while leaving the rest of the handball world awestruck.

In part one of this exclusive three part Patreon interview with the Canadian superstar, Bell discusses his start in the game, his coach and greatest influence, his early tournament successes, his greatest inspirations, and much more. Enjoy!

All pictures courtesy of Danny Bell and the WPH

How did you get your start in handball?

I started playing Handball when I was 12 with my brother Michel (14), my dad used to work in a sports center and we had swimming class and after the class we had to wait for him to finish work so he gave us an old tennis ball to use in a squash court. Best time of my life playing my brother with my dad watching from the top. We never laughed that much in our life. We had a grueling rally that lasted forever and the only reason the volley ended is because we were laughing too much. Me and my brother were always very competitive in every aspect, I always wanted to beat him at everything we played and that probably developed my competitiveness more than a lot of people. Just like Michael Jordan and his older brother (if you guys watch the Last Dance on Netflix). I’m far from being Michael Jordan but some people will agree that I have that kind of competitiveness in me.

Read the conclusion of Part I thru Part III on Patreon.com/wphlive.