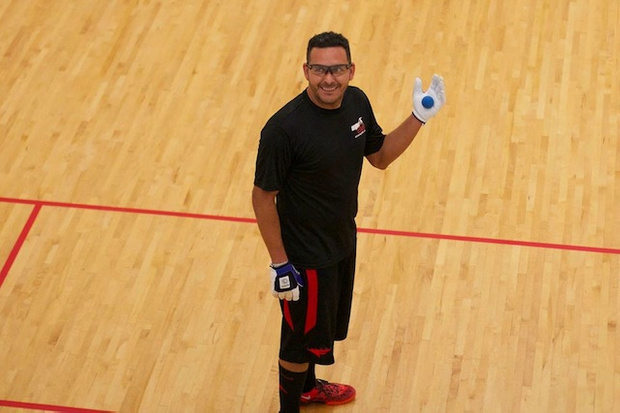 WPH Patreon turns back the clock to relive the “2-Minute Drill” with Marcos Chavez conducted in March of 2014. At the time of this “2-Minite Drill,” Chavez had won one SR48 title and had never cracked the R48 Elite 8. Since this interview, Chavez added nine SR48 titles and cracked the R48 Elite 8 for the first time as a 44-year old at the 2019 Montana Red Death. Enjoy!

March 2014- The WPH recently had the opportunity to chat with one of handball’s most dynamic personalities and showmen, Marcos Chavez. At 40, Marcos is the only player ranked on both the R48 and SR48 tours and Chavez is also a prominent fixture on the WPH 3-Wall Big Ball Player’s Cup Series. Hear what Chavez has to say about what big ball has done for his game, who he most wants to beat, how he balances family time and handball and much more!

You’ve said that playing big ball has helped you to rediscover you love for handball. Why?

Marcos: Small ball just became redundant with the same players within the last 15 years playing each other all the time. Going to watch the big-ball game one day really opened my eyes to how many other players there are at the 3-Wall courts, so I tried it and got beat by a C player and that angered and inspired me to figure out the sport.

Read the conclusion of this interview on Patreon.com/wphlive.