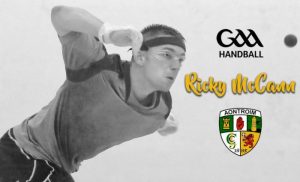 (Pictures and story posted by GAAHandball.org)

Paul Fitzpatrick spoke to one of the greatest of this century and arguably the best ever Antrim player, Ricky McCann.

How did you first become aware of the sport and start playing?

I first became aware of handball when I was a youngster, growing up in my area there were side streets that consisted of gable walls of houses, although the majority of my time was playing soccer on these side streets, there were times when we would play handball off the gable walls, particularly in the summer.

A few of the older lads would be playing and we’d join in with them, to me it was just another game to play during the summer months when we weren’t playing soccer. At the time I also had gone to Edmund Rice College (formerly known as CBS Hightown), and they’d a couple of outdoor three-wall courts, I’d play at lunchtimes, break times and sometimes after school.

Around the time I was also playing Gaelic for Pearses and it just so happened that they had a handball team, ironically consisting of the older lads we used to play against on the gable walls, Ricky Dundas, Shane McAllister and Martin Campbell. I decided to start playing indoor handball with Pearses and I’d also been playing schools handball against other Belfast-based players.

At the time Robbie Mc Mahon was a teacher in Hightown and he’d take the pupils to tournaments and organise some indoor court training. I’d started to really enjoy the game and was hooked on it, however as I had never really played indoors, I found it tough and very frustrating, the ball was harder and much bouncier than the tennis balls that I’d been used to playing with. My timing and rhythm was off and didn’t know how to take the ball off the backwall. In those days if you won serve, you more or less won the game. At the time I would have played maybe once a week indoors and I wasn’t getting as much practice/games as I wanted to and decided to join Gort Na Mona where Robbie would become my coach.

At that time there was a really strong league in Antrim, Gort na Mona had three or four teams in several divisions. Division 1 consisted of Paddy Crothers, John McGarry, Eddie Mallon and Jim Smith.

St Paul’s had Stevie Madden and Joe McAllister, McDermotts had Billy Silcock and Thomas Maguire, Rossa with Donal Armstrong and Collie O’Hare. Dwyers had Joe and Larry Rainey who were really good players too. Tuesday nights were league nights in Beechmount Leisure Centre and there’d be at least 50 people watching from a small gallery if Paddy was playing Billy or Stevie. Just below those guys you had Sean Devine, Seamus Ó Tuama, Ciaran Curran and Paul Graham, the latter two were playing for Queens at the time. It was my goal to improve and challenge my way up through the leagues, to play for the Division 1 team.

Did you make progress quickly when you got into it?

It was around the age of 14-15 that I really started getting into the game, I wouldn’t say I improved quickly. I just really enjoyed playing the game. That time I was playing other sports, Gaelic in school and soccer outside of school as well. But I was hooked on handball. They always talk about playing lots of sports when you’re younger and then focus on one as you get older. I started handball relatively late and at the time Paddy Crothers took time out and trained the younger lads.

The whole Gort na mona team were brilliant with me, patient and encouraging, we’d train on Wednesdays and Sunday mornings. I started playing colleges handball for Hightown and I recall my first game was against some lad from Hilltown, I was really nervous and got beat when I was probably the better player.

The colleges games would be played in Eugene Quinn’s in Armagh and I remember playing my game and then watching the doubles game that was played after my match. It was the first time seeing Paul Brady playing. He was thin with really baggy tracksuit bottoms, an oversized blue Cavan shirt and his gloves were about two sizes too big for him.

He was all underhand at the time, I remember thinking to myself “this kid is nuts” – he would try and kill the ball from anywhere on the court, even from head height with his massive wind up underhand shot. He had no fear, always going for the kill.

As I said, it was moderate progress for me, I’d moved to St Mary’s to do my A levels and that is where I got an extra day’s training in. Donal Armstrong, who was a very strong Intermediate player at the time, was teaching there so we’d arrange to play every Friday afternoon at Queens PEC. At the time Donal was a fit, strong, powerful player and also very competitive, so I was getting really good games with him. Those games coupled with club training helped me win the senior All-Ireland colleges (schools) around 1997.

It was around that time that I had modest success, winning Ulster U17 before getting in the All-Ireland semi-finals. As I progressed up to minor, I played Paul Brady two years in a row and beat him in the Ulster final both years. Once I got out of Ulster, I’d play Kenny Kane.

Kenny Kane was several levels above me at the time, I remember thinking to myself, how am I ever going to get close to him never mind beating him? His game was that advanced. Kenny Kane was in that group with Tony Healy, Barry Goff and Eoin Kennedy were all several steps ahead of me.

There was a real strong mix of young players and just above those guys were Ciaran Curran, Michael Finnegan, Gavin Buggy and Dominick Lynch as well. On top of those guys, you had Duxie, Walter, Peter McAuley and Eddie Corbett, Paddy Crothers, Stevie Madden, Billy Silcock who were the main senior players around that time.

My goal was to keep improving, keep training, to try and reach that next level. It got to the stage then where I almost didn’t really enjoy the game, I wanted to improve so much and to do so well that at times that at times there was no joy in it. I needed to learn to back off from time to time. I trained harder when I went to university because I had extra time from classes.

I had played in the Collegiates both at home and in the States where I got to know Paul, Tony, Barry Goff and Eoin better. It was also the first time I’d seen how the Americans played and in particular David Chapman. I remember being mesmerised by his style of play, his accuracy, game intelligence and reading of an opponent.

Based off these experiences, I worked on my two hands, my fitness, my power but I would say what would let me down most was the mental side of it, the tactical side. It took me much longer to develop that, I’d say I probably didn’t develop that until I was 22-26, that’s when I got the balance of game tactics with the physical side of it.

READ THE REST OF THE STORY HERE>