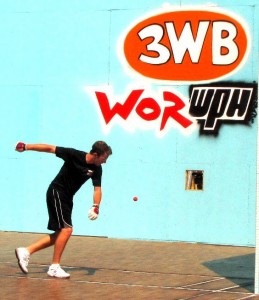 Coach (now/ever): None.  I talk handball with my dad and he deserves the credit for much of my success.

How long have you been playing: 14 years

What do you do for work: Real Estate Development

What are your goals in handball going forward:  Play when it’s enjoyable, don’t play when it isn’t

What are your goals for the R48 season:  Qualify in either Denver and NY.  It won’t be easy.

How do you prepare for Race events:  Different P90x workouts up until the week before and play 1 or 2 matches the week of the event

What do you love about handball:  The atmosphere surrounding a big match.

How would you describe your game: Disaffected malcontent with a big left hand

What is your best shot: Personal motto : If the ball comes back after the serve then all is lost

Given the choice, what top R48 would you most like to play: Emmett Peixoto

Who has inspired you to play this game at such a high level: Tyree Bastidas has improved so much that I was forced to improve or get left behind.  It’s still a work in progress but it’s nice to have someone pushing boundaries of ability on the court

Who do you think is the best player of all time: Dave Chapman.  There is no one smarter on the court.

Which pro would you like to have played in his prime? Naty Alvarado Sr

Mike Schneider is one of the best all-around handball players on the planet, possessing the ability to play 1-Wall, 3-Wall and 4-Wall small ball and big ball at the highest level. Schneider’s unorthodox style is reminiscent of Sean Lenning, as both are able to generate massive hooks and power with the flick of the wrist and seemingly little effort. Schneider implements a two-handed offensive attack with a deadly serve to keep his opponents off-balance. Schneider has been close to capturing some of the games biggest titles, including an 11-10 tiebreaker loss in the semifinals of the 2013 1-Wall nationals to eventual champion Tyree Bastidas. Look for Schneider to ascend the WPH R48 rankings in the next few seasons.