JR WPH was thrilled to host three outstanding junior handball clinics in Las Vegas, Los Angeles and Toronto last weekend; plus a full on 1 wall junior shootout in New York during the time of this post. Junior players from across North America were coached by R48 and WPH Outdoor stars, with each junior player learning to develop the proper stroke and to have fun on the court. “The mission of the World Players of Handball is to inspire the next generation of handball players through structured junior handball clinics with certified coaches, presenting junior handball competitions that promote sportsmanship and camaraderie, and making the game fun,” declared WPH Youth Donor and Development Director David Fink. “We created Junior WPH in 2013 to fulfill our mission of growing the game and since debuting Junior WPH three years ago, we have hosted thousands of junior handball clinics in North America in family-friendly parks, athletic clubs, tournaments, schools, universities, and YMCA’s.”

Check out Junior WPH’s most recent clinics from the middle of May ‘16 below! Junior WPH Clinic at the Vegas Lte: WPH Coaches David Fink, Shorty Ruiz, and Tanisha Groomes hosted a clinic for juniors on hand at the Vegas Lte, with Ruiz and Groomes explaining the art of the right corner kill and the “out the door” serve to the left. The inspired juniors aimed for targets, as each applied his new skills. The juniors then played points against the pros, with the end of the clinic featuring a “King of the Court” tournament. Following the clinic, the juniors played in the Junior WPH Vegas Lte Showdown, with 17-and-under and 12-and-under singles divisions and a doubles exhibition. Following the JR WPH Clinic, the juniors could not be kept off the courts. The juniors were so excited to play that they played points during every timeout and game-break of the WPH Outdoor men’s and women’s matches while awaiting their turn to play matches. “My eight-year old son started to show interest in handball this year, but after the clinic he just cannot wait to play,” beamed Manuel Yep, Sr. “He woke up the day after the clinic begging to play handball!” Junior Clinic at the Canadian National Handball Championship: WPH Coaches Daniel Cordova, Ryan Bowler, and Kevin Kopchuk held a special Junior handball clinic for the youngsters in attendance at the Canadian Nationals. Known as the “hop artist,” Cordova explained and demonstrated the techniques required to execute the reverse and natural hop, as well as the fundamentals to the correct sidearm handball stroke. Canadian superstars Bowler and Kopchuk discussed the importance of letting the ball drop and having fun. “It was nice also that many juniors were able to share an experience with Coach Daniel in the court and beautiful even more, to see the parents in the gallery watching their kids go through some drills with The Mexican Maestro….clapping if they hit the target and simply pumped that the kids were having so much fun,” stated Kopchuk.

Thank you for growing the game Daniel, Ryan and Kevin! Junior Clinic at the LAAC Wafe Risner: WPH Coach Vic Perez coached a sensational clinic during the LAAC Wafe Risner, leading a group of energetic youngsters through the handball warm-up and various shots and strategies to help the juniors play better handball and have more fun on the court. After reviewing techniques and fundamentals to improve shot execution, Coach Vic held a target-hitting competition and concluded the clinic by providing the participants with the opportunity to play rallies against R48 pros Sean Lenning and Luis Moreno. Plus help from Marcos Chavez & Luis Moreno.  Thank you Coach Vic! 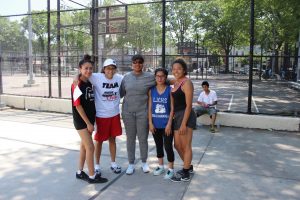