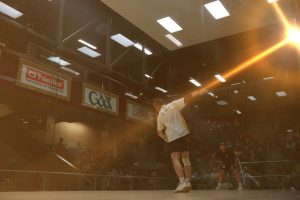 Walsh, who turned 50 this year, was the most decorated handballer of all time. He fell ill on the way home from a senior doubles tournament in Cavan last Saturday and passed away on Thursday after his condition deteriorated badly on Tuesday morning.

Poignantly, Ducksie (often misspelled as ‘Duxie’) was on top of his game to the end. Just a fortnight ago, in the inaugural Irish 60×30 Singles Nationals in his home court of Talbot’s Inch, Walsh defeated number one-ranked Eoin Kennedy of Dublin in the final of the Open Singles.