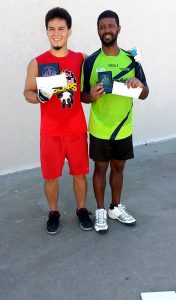 The final day at the 2016 National One-Wall Championships kicked off with the Men’s Singles final, as Tyree Bastidas aimed for his fourth consecutive singles title and fifth overall. Tyree would face 1-Wall small ball veteran lefty William Polanco in the early morning final. Tyree took a one-game lead behind strong serving and overhand power during the rallies. Polanco rallied in game two, building an 11-6 lead and seemingly in control of the game. Tyree regained control, scoring 15 of the final 19 points of the match to defend his singles title. “Tyree dominated with powerful serves that got him several aces,” stated WPH reporter and women’s singles champion Danielle Daskalakis. “If Willie returned the serve, Tyree just used his power to take over the rally.”

Tyree slammed in the doubles with Billy O’Donnell, defeating Mike Schneider and William Polanco in two exciting games. “The pace that Tyree and Billy were imposing was really intense and it just looked like Mike and Willie were tiring out,” stated WPH reporter James Flaherty. 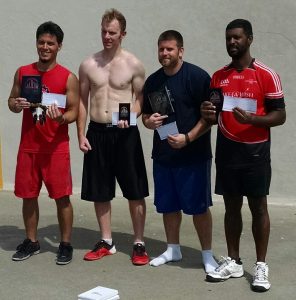 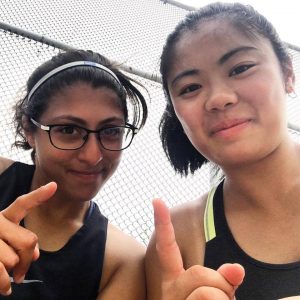 Tyree Bastidas continued his impressive play in his quest to repeat as the USHA National One-Wall champion, turning back frequent rival Billy O’Donnell in two games to reach the final. William Polanco and Jurell Bastidas played virtually even throughout game one of the bottom bracket men’s singles semifinal, with Polanco edging Bastidas 21-18. Polanco surged in game two, using the momentum from a close first game win to cruise in game two to meet Tyree in Sunday’s final.

Danielle Daskalakis repeated as the women’s singles champion with alarming ease, outscoring her semifinal and final opponents by a combined score of 84-12. Daskalakis will aim for the slam in the women’s doubles final on Sunday with partner Sandy Ng.

Bright sunshine and high humidity greeted the men’s singles quarterfinalists on day three of the 2016 USHA National One-Wall Championships, as players would have to battle not only their opponents, but the brutally hot conditions as well.

Tyree Bastidas played like the defending champion is his quarterfinal win against Eddie Perez, dominating the match from start to finish. “Just watching Tyree it’s going to be very hard for anyone to beat him,” stated WPH reporter and Race 4 Eight pro Stephen Cooney. “He looks much sharper than he did a few weeks ago (at the Speaker’s Cup) and he is doing crazy things with that ball.” Billy O’Donnell dominated Juned Kahn to book a spot in the semifinals opposite Tyree. William Polanco cruised past current world 1-Wall finalist Victor Lopierre to book his spot in the semis. Mike Schneider entered the event as one of the favorites but was upset by Jurell Bastidas, making him the only one of the top four seeds to not advance to the semis. Schneider and J. Bastidas split the first two games, with Schneider seemingly carrying the momentum into the tiebreaker on the heels of a 21-11 second game win. Jurell erased the Schneider momentum in the tiebreaker with a blistering serve that struck the wall just inches off the ground. “Jurell’s serve is just too good and makes it nearly impossible to get into a rally when it’s on,” stated Cooney.

Danielle Daskalakis kept her hopes alive for a repeat title in the women’s singles by defeating WPH ambassador Vernonica Figueroa in two games, while En-Lin Huang and Theresa Haley played the match of the day in the women’s bottom bracket semifinal, with Huang overcoming Haley 11-8 in the tiebreaker.

Day two at the 2016 USHA National One-Wall Championships featured the top eight men’s seeds in action, with each looking to cement his spot amongst the 1-Wall small ball’s Elite 8 and move onto Friday’s quarterfinal action.

The intense heat and humidity at Coney Island produced several scintillating round of 16 matches, with several 1-Wall superstars being ushered out of the draw. The match of the day featured longtime former doubles partners and multiple-time 1-Wall national doubles champions William Polanco and Pee Wee Castro battling. Polanco won game one and held match point in game two but was unable to convert, with the clutch Castro forcing a tiebreaker. The tiebreaker featured outrageous shot making and drama, with Polanco ultimately edging his former partner 11-8 in the decider. Victor Lopierrre continued his outstanding 1-Wall play, overcoming 6th seeded Robert Lee in two games. Top seeds Tyree Bastidas and Mike Schneider were impressive in their opening round wins, as were Billy O’Donnell, Juned Khan, Jurell Bastidas, and Eddie Perez.

Round of 16 Results (Thursday)

Round of 8 Matchups (Friday)

Thursday’s Round of 16 Matchups: