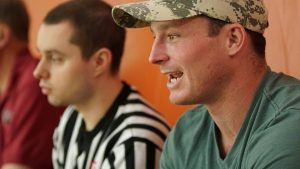 Eugene, OR, WPH Press, 2/25/18- The End of February Weekender was held on February 23rd – 25th at Courtsports Athletic Club in Springfield, Oregon. Oregon’s 6-time defending State Singles Champion and #19 WPH R48 ranked pro Dalton Beall was looking to defend his home court, but with six of the top 10 players in the state also in the draw, Dalton was sure to face stiff competition. 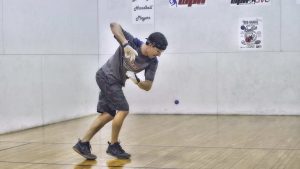 The final round saw the latest in a countless series of championship matches between Dalton Beall and Cody Townsend, unquestionably the top two players in Oregon and the Pacific Northwest. Continuing the recent trend, Dalton claimed victory, but it was not easy for him. Cody pushed Dalton to the limit, but ultimately fell short, 21-19, 21-16.

The End of February Weekender is well known for its tremendous hospitality and the Beall Family and tournament sponsors did not disappoint. The Saturday evening banquet provided all-you-can-eat steak and prawns to the hungry participants, and the raffle saw Michael Stenberg go home with the coveted prize – the popular new custom WPH jersey from Jakroo. Thank you to tournament directors Mike Hollander, Sean Beall, and Randy Stender, tournament sponsors and volunteers, and the rest of the Eugene Handball Association for a terrific event!