On April 23rd, the announcement was made for a Cinco de Mayo Shootout to be held at Edison Park in Huntington Beach, CA, on May 5th and 6th. With a little over two weeks for players to sign up, the tournament received 120 participants competing in 4 major divisions. There was even a women’s event that drew several SoCal women into the picture, and one coming all the way from NYC. 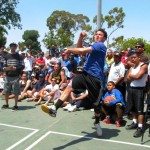 Early Saturday morning, the hype began with near upsets in the first round. Number one-seeded “A”player, Gollo Tellez, was forced to a tie breaker by the number 33 seed. He barely escaped the upset and gained the chance to fight through the tough “A” bracket. A unique format was used for the “A” bracket. The open singles players who lost in the first round dropped into a separate “A” bracket. The drop down and real “A” remained separate, with the winner of each bracket playing off for first and second.

The open provided a couple of upsets in the round of 16. Youngster Raul Calvillo took out Sal Duenas early on, and Marcos Chavez made ripples in the draw defeating Rudy Cruz. Juan “Ibanez” Santos dismantled New York’s Pee Wee Castro in the quarterfinals and Shorty Ruiz edged over one of the most intense players in the game, Gabino “G-man” Velazquez with incredible serving. This lead to some of the most exciting match-ups we’ve seen to date. Santos was forced to face number one seed, and favorite, Samzon Hernandez. With over 800 spectators, Santos made his name known defeating Hernandez in a tie breaker. On the other side of the bracket, brothers Ricky and Shorty Ruiz had to compete for a spot in the finals. Shorty had never lost to Ricky in a tournament prior to this match. The Ruiz family was distraught over which brother to cheer for, and the crowd erupted when Ricky got his first win over his older brother in another very close breaker. 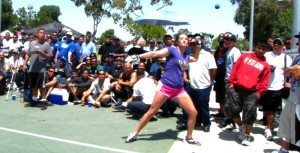 Several SoCal women showed up to compete for bragging rights and the title. Young Lilly Perez put up quite a battle in the semis against Ashley Moler, taking her to a tie breaker. Moler mustered together points to take the match. The other semis had a West Coast vs. East Coast showdown with Jackie Ruiz vs. Melissa Sky. Sky took the match in two games leading her way to the final. The finals proved to be one of the most exciting matches of the event. Before the game, other games had to be rescheduled to make way for room for all the spectators. Rumors say over $5,500 in bets were on the line, as SoCal was treated to viewing women’s handball for one of the first times in big ball. After extensive rallies, dives, and rants from the crowd, Moler prevailed over a fatigued Sky for the first women’s title. 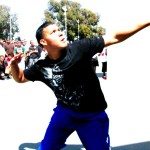 In the open doubles, the number one and two seeds cruised to the final. Ricky Ruiz/Samzon Hernandez were the first and favorite duo. Gollo Tellez and Juan Santos as the two seed brought an interesting chemistry to the draw. The legendary Tellez, one of the greatest of all time, was the main mentor for Santos in learning the game. Tellez was also the oldest person in the draw, and Santos the youngest. In the end, the powerhouse team of Ruiz/Hernandez was too much to handle taking the cash and yellow jerseys. 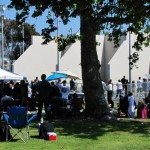 This inaugural event for WPH Outdoor was one of the most successful to date for the WPH. The energy and opportunity in SoCal is infecting the area as players are already in high anticipation for the next stop. Special thanks to T-wack (trophy donor), Marcos Chavez/Sal Duenas (balls), Tucson Rolling Shutters, Mintec, WPH Outdoor, Edison Park, City of Huntington Beach, Luis Gaytan, and Mario Garcia (security). Huge thanks to tournament staff Dave Vincent, Lolita Tapia, Abe Montijo, and Daniel Cervantes.

Rankings are based on a point system that gathers points per stop (no “best of” being used), per round and uses results from singles (Rd of 16 and better), plus round of 8 results in doubles. Doubles carries less weight. If two or more players “tie” in points (ie round of eight loss) with another player, then the tie is broke with head to head match-ups or total points scored to finish that round. Each cup stop (Shootout) will carry this point structure (singles): 1 500, 2 375, 3-4 290, 5-8 175, 8-16 100; doubles 1 200, 2 100, 3-4 75, 5-8 50. Championship Cup (season ending tournament) will carry double points. If you forfiet from an event (not counting certain situations), you may lose that round’s pay and points; no play-no pay!

What does the Player’s Cup Series mean?

WPH will use the results from the Cinco event, plus three other (TBD) stops, to include the Player’s Championship September 20-23rd. Those with the highest points will win cash and be named as the Final Four of Big Ball 3 Wall.