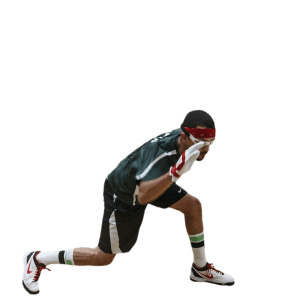 Sparring partner(s) at home: Growing up I was lucky to play with Sean Lenning and Luis Moreno for a few years. Now, I mainly play with the kids and locals 2 vs1. Once in a while, when our schedules work out, Moreno and I will still play.

Most important win in a tournament and most satisfying win in a tournament: I think technically beating Selestow and making the quarters of the Salt Lake Pro Stop last year was my best result so far. Most satisfying win was maybe last year in Denver. Won the State Doubles with Anthony Sullivan against Jonathan Iglesias and Mike Semplice. I think we were down 25-16 in a one-game to 31 match and we came back to win the match 31-30. My partner and I worked our a##es off to win that match and I cant remember being that exhausted after a match. Great feeling winning though.

Best tournament ever won: I don’t have that one great singles tournament win yet. I have won state singles before but the one that was pretty cool was when I was 17 and I won the A’s at the Hall of Fame tournament here in Tucson. I won three 11-10 tiebreakers in a span of two days. One of those wins was Luis Cordova (Quarters or Semis I think).

How long have you been playing: I have been playing for 11 years. I started midway through my freshman year of high school.

What do you do for work: I started teaching middle school in August. It’s part of the reason why I have not been able to attend any Race Stops yet. It’s been a great learning experience and I even have a few of my students playing handball now. I am also still the head coach of our Tucson Junior Handball Team through the Fred Lewis Association.

What are your goals in handball going forward: My personal goals in handball are to someday crack the top 4, to win a Nationals/Pro Stop, and to hopefully stay healthy enough to play this great game for many, many years. I have smaller goals that help keep my motivation, one of which was qualifying at every Pro Stop last season.

What are your goals for the R48 season: Because of work, I will only be able to participate in Denver this season. But my overall goal for any season is to qualify at every event, and to earn an invite into that top 8.

How do you prepare for Race events: I try to focus on cardio because it is such a big part of my game. I also do some work on my shoulders so that they are strong enough to last me through the event. Lastly, I take a lot of vitamins so that I don’t cramp up like I used to! The biggest thing, bigger than the physical aspect of the game, is to have your mind focused. You must practice hard and try to create the atmosphere that you are in a Pro Event so that you can be at your best come actual tournament time. If your training is lazy and unfocused, the results will be very inconsistent.

What do you love about handball: I love being around the people that play this sport. I also like the challenge of the game because it is both physically and mentally challenging. Handball is also a great judge in character. Usually, who you are on the court is who you are off the court.

Favorite pro player (now or ever): I like everyone in the Pro circuit because they all have great and unique characters. Everyone is pretty cool so no need to pick one.

How would you describe your game: I guess I am a scrappy player. I will give it all I got and I will try to get the job done even if it doesn’t look pretty. Over the years, I am trying to learn how to be more aggressive but also learn better defense.

What is your best shot: When I’m feeling good, my serve.

Given the choice, what top R48 event would you most like to play: Maybe Salt Lake but every city does a fantastic job so going to any R48 Stop is a treat.

Who has inspired you to play this game at such a high level: I think most of my motivation is self-motivation. That is what got me to the Pro level and I think what is helping me moving forward are the kids that I work with and all of my supporters here in Tucson. I want to make this community proud.

Who do you think is the best player of all time: Paul Brady.

Which pro would you most like to have played in his prime: It would have to be Naty Sr. Fred Lewis always talks about what a great player he was and it would have been good to experience that first hand.