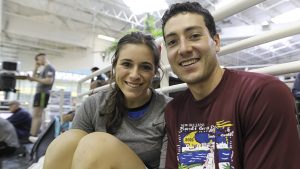 (EDITOR’S NOTE:  You can watch most of the men’s and women’s Rd of 16, 8 and 4 on the WPH Patreon Page On-Demand:  patreon.com/wphlive.  Over 30 videos have been posted from those rounds) 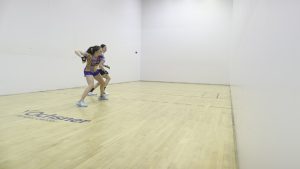 WR48 #1 Catriona Casey extended her 21-match WR48 winning streak in her quarterfinal against Suz Entzeroth, not allowing the Missourian on the scoreboard in either game.

WR48 #2 Ciana Ni Churraoin faced a stern test from Tucson’s Ashley Moler, as Moler’s infant daughter Scarlett watched her mom dazzle with fist passes and kills to push CNC in both games before falling to the four-time WR48 finalist in two games. “I had my chances, I just didn’t convert my opportunities,” lamented Moler. 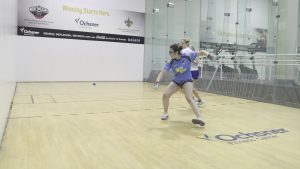 WR48 #3 Fiona Tully faced a white hot Megan McCann, dropping the first game on the strength of McCann’s incredible serving and kills. Tully took control of game two, building an 11-2 lead. McCann charged back, trailing by just two at 12-14. Tully capitalized on a McCann error to gain a side out and served out the game. Tully was in control in the tiebreaker, completing her comeback advance to the semifinals. “I had my chance there in the second, I just missed one that would have given me 13,” stated McCann. “Fiona stepped it up in third and was in control. It was definitely a learning experience.” 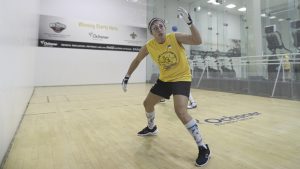 Danielle Daskalakis and Tracy Davis added another chapter to their storied rivalry, as the pair split the first two games and battled deep into the third game. With many of the rallies exceeding 20 shots, Daskalakis was able to convert on several more opportunities to overcome her mentor and great friend. “There are about three shots I wish I could have back,” stated Davis. 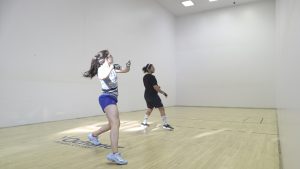 Casey was too strong for Daskalakis in the semifinals, keeping the dangerous sharp shooter in the back court and cruising in two games.

In a likely preview of next week’s USHA Collegiate National Women’s final, WR48 #2 Ciana Ni Churraoin met WR48 #3 Fiona Tully for a spot in the final. CNC played her best ball in game one, overpowering Tully from the start and taking a one-game lead. 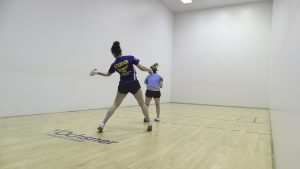 Tully matched CNC for much of the second game, adjusting to CNC’s powerful drives but ultimately came up short, as CNC advanced to her fifth WR48 final and Tully clinched third for the third time in three WR48 starts. 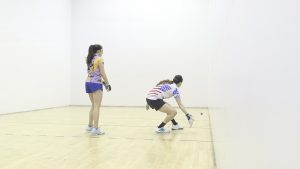 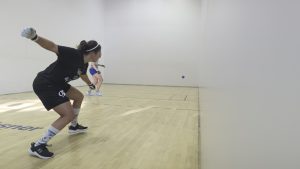 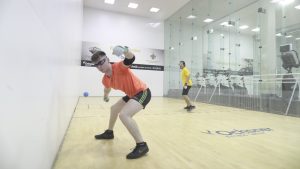 Seeking his third R48LTE title, Lucho Cordova defeated the 2019 USHA “A” national champion David Walsh in two games. “I had a lead in the second at 9-6 but he came back and took it,” stated Walsh. 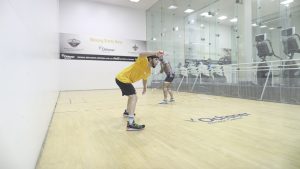 Danos scored the final eight points of the match. “It just seemed like Patrick stopped shooting when he got to 13,” stated Danos.

David Fink overcame Adam Bernhard for the second consecutive event to advance to his second R48LTE semifinal of the season (Portland), while 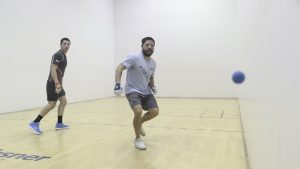 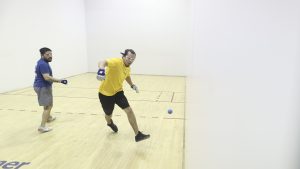 Ruiz executed at a far higher percentage in game two, stunning Lucho with a number of deep kills to force a third. Lucho took control in game three, relying on his conditioning, retrieving, and one-inch high kills to advance to the Mardi Gras final for the second consecutive year. “I just need to get into better shape,” stated a disappointed Ruiz. 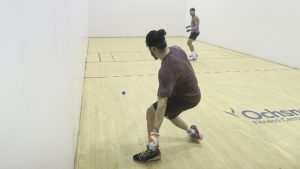 David Fink defeated Danos Cordova in their last encounter in the fifth place final in Montana three weeks ago and after rallying from an 11-7 deficit in game one to take a one-game lead, appeared poised to make his first R48 final in 11 months. Cordova applied the pressure in game two, building an insurmountable lead with power hop serves and controlling the front court. Game three was nearly identical, with Danos pushing Fink into the back corners of the court and finding the bottom board with either hand to advance to the final. “Danos was stronger, sharper, and just a lot better than me, a lot better,” stated Fink. 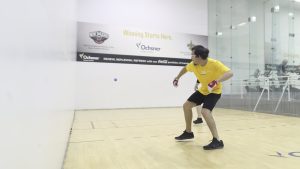 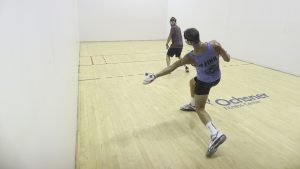 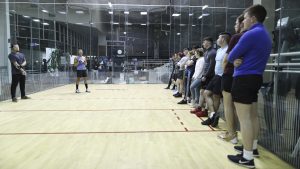 “These kids made this event and we all the MVP’s of New Orleans,” stated Fink. “The Irish traveled 4,200 miles to be here, while the other juniors drove up to 15 hours to be a part of this event. These kids are everything that makes our game great. 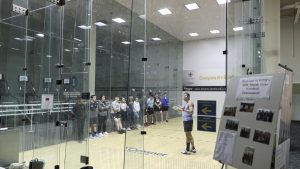 Not only are all of them phenomenal world class players, they demonstrate wonderful sportsmanship, amazing effort on the court, and are willing to referee, move boxes, and do whatever they can to help the event. Lucho and I were thrilled to be able to answer their questions and hopefully make these great kids better players.”

For more info on the 2020 Mardi Gras R48LTE/WR48, including starting times and to follow the brackets go HERE 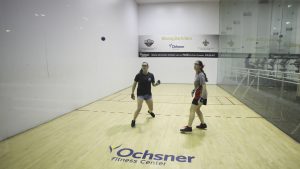 Ashley Moler advanced to Saturday’s WR48 Mardi Gras quarterfinals with a convincing two-game sweep against Kyra “K3” Vidas. “I had been playing well, I just don’t know what happened in there,” stated a disappointed K3. 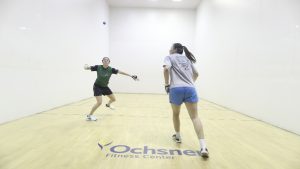 Former WR48 finalist Suz Entzeroth started slowly against her Missouri rival Mikaila Mitchell, dropping the first game 15-2 but rallied to advance to Saturday’s quarterfinals by winning the next two games. “This happens every time we play,” stated Entzeroth. “It’s always a tiebreaker and both of us are all over the court keeping rallies alive. Our rivalry has pushed us to the level we’ve reached today.” 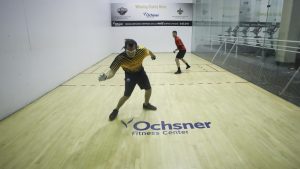 Top-seeded and defending R48LTE champion Lucho Cordova jumped out of a 15-hour cross-country journey from El Paso and survived game point in the second game against Miami’s Andrew Reiersen, while second-seeded Danos Cordova overcame his cousin Enrique in two games. 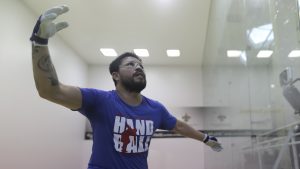 Fifth-seeded Shorty Ruiz landed just hours before his round of 16 clash with Patrick Murphy and found himself in a tiebreaker after dropping game two. Ruiz raced to a 13-0 lead in the tiebreaker and ultimately advanced. “I just lost my concentration in that second game and he was playing good,” stated Ruiz.

Sixth-seeded Adam Bernhard overcame left-handed Adam Walsh in a close first game and pulled away in game two. “I just lost my focus, it was a good learning experience though,” stated Walsh. 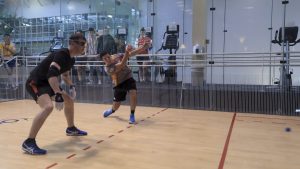 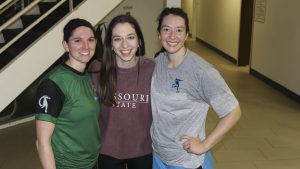 The WR48 and R48LTE will be in action all day Saturday, as well as the WR48 and R48LTE playoffs, A/B singles, and Open Doubles. Stay tuned to this thread for updates from New Orleans throughout the weekend.  You won’t be able to watch this event LIVE; however, you can watch them on demand at patreon.com/wphlive.  Become a WPH Patreon HERE.

For more info on the 2020 Mardi Gras R48LTE/WR48, including names, times and to follow the brackets go HERE