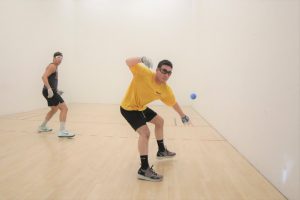 From Ciana Ni Churraoin’s rise to WR48 #2 after starting the season unranked and coming off knee surgery, Fiona Tully advancing to the semifinals of her first two WR48 starts and finishing the season #4, The Flying Cordovas combining to win four R48 titles, Niall O’Connor and Fergal Coughlan, Jr. qualifying on their first attempts to 2018 USHA Collegiate National Champion Leo Canales, Jr. earning points in all eight of his 2018/19 R48 starts, the 2019 Breakout Star could have been justifiably awarded to any of the aforementioned Race 4 Eight stars. 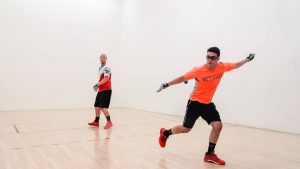 Canales finished the 2018/19 Race 4 Eight season ranked 15th after starting the season unranked. Canales ran through the gauntlet of top qualifiers during the nine-event R48 Men’s Pro season, emerging in all but one instance with a combination scintillating comebacks, spectacular play and consistent ball.

Leo’s season did not start promisingly at the season’s first stop, as the “Juarez Kid” trailed 3-19 in the Atlanta qualifier final to John Wayne Cortez. Canales tied the one game match at 20, took a 24-20 lead and held off Cortez in overtime to author one of the biggest comebacks in qualifier history. 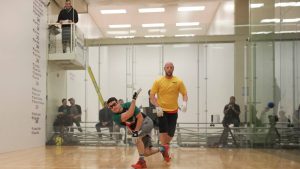 Canales would add another dramatic comeback at the Tucson R48LTE/USHA Hall of Fame, overcoming three match points at 10-14 in the third game against former R48 #1 Mando Ortiz. 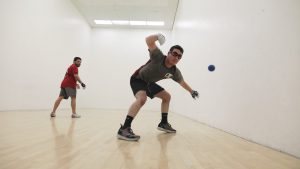 “I definitely think gaining more experience and getting comfortable (on the tour) has helped me to find success,” expressed Canales, Jr. on his breakout season. “When I first started playing the tour in 2016 I hit a lot of passes and roof shots and that’s just not going to do it. I developed a more aggressive mentality from watching the style of play from the top pros and realizing that I needed to play more offense. The level of competition from my regular sparring partners Lucho Cordova, (dad) Leo Canales, Sr., Drft Fernandez, and Noe Arenas in Juarez has also been a huge help to my game.” 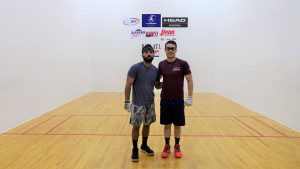 “Leo was not just qualifying, he was beating top players at each stop,” stated R48 #16 Abraham Montijo. “Iglesias, Mando, and Esser are tough guys to beat and he beat them all and then some.”

“Leo has a lot of upside,” stating Juarez training partner and R48 #4 Lucho Cordova. “Leo did not even start playing handball until college after playing baseball growing up and he has already jumped into the top 15 and beating really good players. I predict he’ll be ranked between 9-12 at the end of next season, if not in the top 8.” 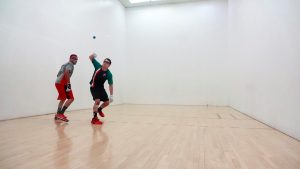 “Leo knows how to get you into awkward and long rallies and once he gets a bit more experience and learns how to end those rallies more consistently, he’ll become very dangerous,” stated R48 #1 Killian Carroll.

“I have been playing Leo for two years and I have seen the improvement with each stop and each time we’ve played,” stated R48 #5 David Fink. “Leo applies a lot of pressure, he dives all over the court, he hits unorthodox shots, and he is always engaged on every point, regardless of the score. His new commitment to offense has made him a threat against anyone in the game.”

Congratulations to Leo Canales, Jr. on the well-deserved 2019 Race 4 Eight Breakout Star of the Year award!