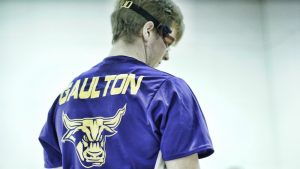 The upper bracket semifinal featured two of handball’s brightest stars. “My semifinal against Michael was very competitive,” stated Esser. “He has improved a lot since I played him at Collegiates. His serve down the right aced me several times in the first game and his right hand kills were on fire. We were tied at 15 before I was able to slow the game down with ceiling balls and passes and take the first game, 21-15. The second game I did more of the same, winning 21-11.”

Second-seeded George Watson overcame Tom Doering and Ray Ure to reach the semifinals in the bottom bracket to setup an all-Missouri clash with Garrett Bacon, who defeated Adrian Anderson and Holden Smith in the opening rounds. 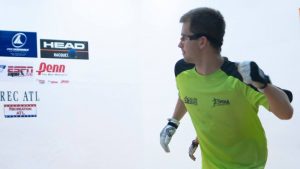 Two of Missouri’s top stars waged a tremendous battle for a spot in the final, with both MO stars leaving everything on the court. Bacon won a close first game filled with dozens of dives and kills and pulled away in the second to upset the second seed. “Garrett wore down George Watson by retrieving everything in the first game and beat a tired George 21-12 the second,” stated Esser.

The final pitted collegiate teammates and frequent sparring partners Esser and Bacon battling for the Bear Bash title. “The final was competitive,” stated Esser. “Garrett has been improving every month, taking games off Max (Langmack) and I at practice, so I knew I needed my “A” game. The first game he did what he does best and retrieved my kill attempts with re kills. It was a battle until 17-15 when I was able to put away my set ups. The second game I jumped out to an 11-0 lead. It was competitive after that, but I was able to maintain my lead until the end.” 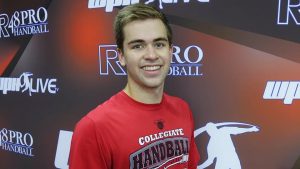 Gaulton bounced back from his semifinal singles loss in the doubles, teaming with Austin Biddle to defeat Bacon and Ross Colyer in the final. “Michael and Austin both served great in the final,” reported Esser. “Michael took control of the second game.”

The Women’s Open featured all of the top American collegiate stars. In the upper bracket, top-seeded Kristen Hughes and Missouri’s Christina Pecaut split the first two games of the semifinals when Hughes was forced to retire with a shoulder injury she sustained earlier in the tournament.

Taylor Rumping defeated Gretchen Gregory in the bottom bracket semifinals to setup a showdown with Pecaut in the final.

Pecaut stood two points from an upset in the final, but could not close the match. Rumping forced a tiebreaker with clutch shot making and dominated the third game to hoist the Bear Bash title. “Christina and Taylor always play close and this one was no different,” stated Esser. “Taylor ended up playing her best and winning in a breaker. Both girls have improved so much.”

Singles finalists Rumping and Pecaut teamed in the doubles but were no match for Mikaila Mitchell and Gretchen Gregory, as Mitchell and Gregory thumped the Rumping/Pecaut pairing.

“The highlight of the weekend was the Mom’s division,” exclaimed Esser. “13 Missouri State mom’s played in their own division. Most of them had never played, a few of them played a few times the month before. We saw tiebreakers, two rollouts, and a seven-shot rally!

Thank you to WPH reporter Sam Esser for the updates from Springfield.