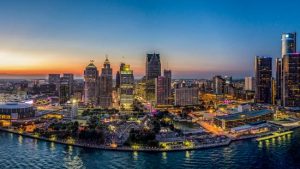 The Open Division was the largest bracket with 10 teams.  The higher seeds advanced Friday night as expected to reach the semis where things were expected to get tougher.  Saturday did not disappoint as Pat Oliver and Pat Myers played a very close first game vs. Pete Dembeck and Ryan Inman.  The veteran and multi time state champion Dembeck paired with up and coming younger player Inman and they took an early lead in Game 1.  Myers/Oliver fought back and the game was tied at 17.  Myers/Oliver continued the momentum to pull out game one  21-19 and get game two 21-13.

In the other semi-final, the defending champion team of Rick Leonard and Jim Karner were trying to get a “3peat” and ran into two grand master champions from Toledo – Phil Kirk and Matt Osburn.  The defending champs had a nice run mid-game in game one and won 21-12.  After an early lead in game 2, Kirk/Osburn found their game and pulled it out 21-19 to force the tie breaker.  The tie breaker was a back and forth battle with Kirk/Osburn taking a 5-2 lead.  Karner and Leonard came back to take a 9-7 lead but gave the box back.  With one out and 9-8 score a diving get off of 2 fingers caught side wall/front wall to roll out and earn the side out.  Karner/Leonard got the box back and won the two hour “instant classic” match 11-8. 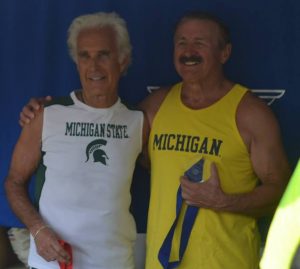 In the finals, Myers and Oliver, the current 3 wall champions were hungry to get a state 4 wall title after tie breaker losses in the semis in previous years.  The lefty righty combination is very tough when they are on and they jumped on Leonard/Karner to win game one 21-10.  Game 2 continued to be all Myers/Oliver as Oliver played a steady and patient back court.  The steady left court play allowed the hot hand of Myers to score consistently with stellar front court play.  Myers was shooting the ball with 1 inch high kills seemingly at will while mixing in fist pass shots.  Karner/Leonard got things going a bit mid-way through game 2 and cut the lead down to 17-15.  It was too little too late as Oliver and Myers continued to apply pressure and closed out the title with a 21-16 win in game 2.

There were 4 teams in A/Drop Down Division.  Sean Walker and Ken Mayer from the Flint area beat some newer DAC players Andrew Bagby and Adam Howe 9, 7 in round 1.

On the other side of the bracket, B champion Tony Girgenti moved up and played with former MSU player Cody Hall.  They played a more experienced DAC team of Fabbri/Taylor who lost round 1 of the open.  Fabbri and Taylor prevailed 2, 11.

The finals went tie breaker with Fabbri and Taylor pulling it out over Walker/Mayer (15), 14, 4

There were 4 teams in the Masters Division.  Sickmiller and Monsour faced Ben Hall and Tim Thompson.  Hall and Thompson won in two competitive games – 13, 17.  On the other side of the bracket, late sub Paul Licari battled foot issues and played very well with Mike Monahan.  Mike and Paul defeated Nick Lowe and Tad Langenderfer in 2 games 3, 11.

In the finals, Licari and Monahan cruised to win 3, 13.  (Next year they may need to play open level based on their play).

The 60s Division had 4 teams.  In one side of the bracket Joe Ivy and Bob Balch beat Jim LaFluer and Angus McIntyre 15, 9.  In the other side Jim Lowe and Larry Price edged out Dan Costello and Chuck Ferro in a tie breaker – 7, (15), 4.

In the finals Ivy and Balch fell behind 5-0 in the tie breaker to Lowe/Price but came back to win the state title.  While Ivy, Lowe, and Price have many state titles between them, it was a first for Bob Balch.  Congratulations Bob.

The 70s was a round robin format with 3 teams.  Keith Thode and Norm Young beat Mike Howe and Kevin McGivern in the first match (6,7).  The number 1 seed of Rich Graham and Carl Valentino also beat Howe/McGivern – 4, 5 to set up the finals.  The national champion 3 wall team of Graham and Valentino was too strong and earned the title in two games over the experienced Thode/Young team.

Thanks to all who participated.  The State Singles will be April 6-8 at Total Sports in Mt. Clemens.