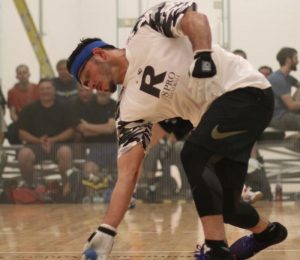 The California Cup was fittingly played on Ryder Cup weekend, with emotions running high as players passionately represented their teams and home turf. Team SoCal’s Mando Ortiz and Shorty Ruiz secured an important point in the open doubles against Erik Torres and Al Quitoriano, dropping game one, 21-19, before rallying to win games two and three. “We were trading corner kills and great back wall shots throughout the match,” stated Race 4 Eight #3 pro Mando Ortiz. “Shorty and I controlled the action in game two and continued the momentum in the tiebreaker with aggressive pass and kill shots.” 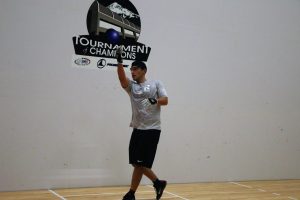 15 total matches were played in the biennial competition, with Team SoCal compiling a 22-10 win/loss record for the team victory. “We are all very proud of the players that volunteered their time and talents to play in the 2016 California Cup,” stated Team NorCal captain Mike Linnik. “They came to play, battled hard, and gave their all. The California Cup is now tied 2-to-2. The tiebreaker will be held in two years, back in Fresno, by popular demand.”

“Thanks to Marcos Chavez for bringing out Vince Munoz, Vic Perez, Carlos Chavez, Shorty Ruiz, Ashley Moler, and myself,” stated Ortiz. “Also big thanks to Tom Martinez for organizing this wonderful event. The highlight of the day for me was the players coming together after the event to celebrate at a nice restaurant.”