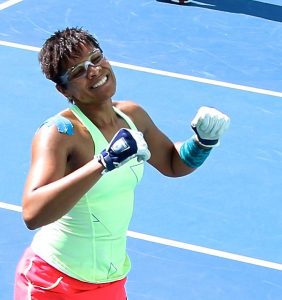 Tucson, AZ, WPH Press, 12/1/15- 40-year old Tracy Davis has established herself as the top cross over star in handball, as she currently holds the Women’s WPH Outdoor #1 ranking and the WR48 #4 ranking. Davis’ journey to the top was winding, spanning decades of commitment and sacrifice to ultimately reach the pinnacle of the world’s oldest ball game.

Davis started playing 1-Wall in Brooklyn in her teens, eventually taking the 1-Wall game more seriously in her 20’s, winning her first USHA 1-Wall pro singles national title in 2001 at the age of 24 and collecting more than 25 pro national and world singles and doubles titles since her first win in 2001. “There is something about handball that I just loved and still do,” expressed Davis. “Anytime I’m having a bad day or have a lot on my mind, I just go and play handball and all of my problems are gone. After more than 20 years in the sport, I can’t see a time that I’ll stop playing handball. Even if I’m not playing in tournaments, I’ll always play because handball is such an important part of my life.”

Davis’ ascent to the top of the game was a gradual and frustrating process for the sport’s #1 cross over star, as “Trey Dey” initially struggled to achieve the type of success she desperately craved. “I wanted to get to the glory without putting in the work for it,” recalls Davis. “I wanted the success to just happen and when it wasn’t, I was frustrated and not enjoying playing at all.” Davis heeded the advice of 1-Wall great and her coach at the time, Cesar Sala. “Cesar told me I had to put my focus on enjoying the process and learning the game and the wins would come.  If I focused on the wins then I would lose sight of what it really takes to win and survive in the game.  He saw that I was going to burn myself out before I even started. It really made me take a step back and evaluate why I was playing handball, and it wasn’t to be miserable.  He said exactly what I needed to hear to turn my attitude around.  I’m grateful for that.”

Davis’ inexperience in using the walls in 3-Wall and 4-Wall made challenging the game’s best a difficult proposition in Davis’ early forays into 3-Wall and 4-Wall. “I remember playing Lisa Fraser Gilmore when I just started playing 4-Wall and she just crushed me,” recalled Davis. Just as she had done in 1-Wall, Davis committed to the process, moving to Tucson in 2009 to train and play with the best 4-Wall players and coaches in the world.

Davis’ commitment in 3-Wall and 4-Wall led to her first 3-Wall national singles title in 2010, as Davis ousted 3-Wall dominator Megan Dorneker in the final. Davis claimed her first 4-Wall major title in 2012, winning the USHA 4-Wall Women’s Classic, and adding two more Women’s Classic titles 2015 and 2017, announcing herself as one of the top women’s 4-Wall stars in the U.S. 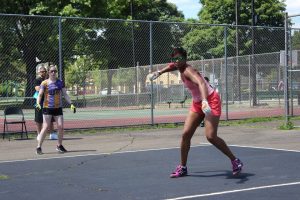 “I’ve had love fests with 1-Wall Small Ball, then 3-Wall Small Ball, and now its 4-Wall. I enjoy playing 4-Wall Small Ball the most right now,” stated the current Women’s Classic champion and WR48 #4. “4-Wall challenges me like none of the other codes have.  I love playing 3-Wall and 1-Wall.  Those two codes speak more to the physical challenge I love about handball and my athleticism suits that style of play.  I haven’t quite figured out how to feel as at ease on the 4-Wall court as I feel playing 1-Wall or 3-Wall.  I’m hoping I figure it out before the body quits, and that challenge is a big part of why I now enjoy 4-Wall.”

“To finish the WPH Outdoor season at #1 means that I am still learning, improving, able bodied, fit and can still challenge myself and my competitors,” stated Davis. “It means I’m still having fun and I’m still in love with playing.” 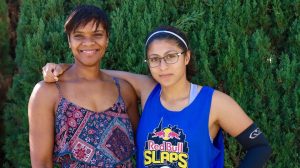 “To be the best takes determination, drive, commitment, and skill,” explained women’s cross over star Danielle Daskalakis. “To do it consistently and earn multiple, consecutive National Titles take physical and mental endurance. To do well as a cross over player and continue to win on multiple platforms takes a tenacity and versatility that most people don’t have. But, Tracy has all of these qualities and above all her passion and love for the sport has both made her so successful at the sport and elevated the sport to new heights.”

Tracy is one of the few players in any sport in which her opponents are happy to see her succeed, a testament to Tracy’s sportsmanship, graciousness, respect for the game, and standing in the sport.

“Tracy is always giving 110% on the court,” stated WPH Outdoor Ironman Sal Duenas. “She has a lot of heart and passion for the game. Her mental strength is something I admire and look to emulate. Tracy is an inspiration to many in handball because she always pushes forward in all codes and is always a threat in every draw she enters.” 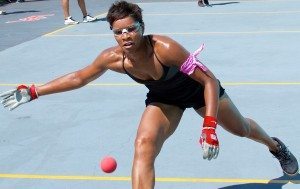 “Tracy is a supreme athlete, both physically and mentally,” stated WR48 #1 and Women’s WPH Outdoor rival Catriona Casey. “She is in exceptional shape, and clearly has a very professional approach to the game. She shows great composure, and balances being a fierce competitor with maintaining great sportsmanship. It’s a great achievement to be the top ranked crossover star, as it’s not easy to juggle different codes of handball. Tracy’s power serve and fly kill combination is particularly lethal outdoors, but she brings that to her 4-wall game also, which makes her a real threat. Tracy is really fun to be around, with a great sense of humour, and she is a fabulous ambassador for our sport!”

Tracy is not only revered for her athleticism and outstanding play, but is also admired for being an icon and inspiration by juniors and pro players alike. Fellow Women’s WPH Outdoor pro and current 1-Wall Small Ball world champion Danielle Daskalakis recalls watching Tracy practice 1-Wall in New York City for the first time. “My first trip to Coney Island handball courts, I saw Tracy practicing. I was star struck and didn’t know if I could call next on her court or if I should ask for her autograph. Tracy is the reason I started doing drills and practicing every day. Tracy is the reason I started working out more and eating healthier to improve my level of play. Tracy changed the way I trained for handball. Myself and many other young handball players in New York looked at Tracy as many young tennis players look at Serena Williams. Tracy is the reason most handball players of my generation started developing low-serves. Tracy’s serve was so devastating and effective, it’s the reason I would practice serving 100 times after every practice session. Tracy is the reason there is a Sandy Ng in small ball handball, the reason Sarah Au developed a low-serve, the reason Shirley and Cheryl Chen began competing and traveling. Tracy set the goal and paved the way for the new generation of players. Tracy still helps mentor me and I’m happy to have her as one of my competitor, mentor, and one of my closest friends. Not many people understand the mind of a passionate and dedicated handball player, so, it is really nice to have someone who understands what I am feeling, the difficulties, the pleasures, and someone I can bounce ideas off of. Tracy has been and will always be my idol and one of the most transcendent players of the sport.”

Handball is extremely fortunate to have Tracy Davis, one of the most elegant, transcending, graceful, and exemplary athletes in all of sports. Congratulations on being the WPH cross over #1 and for inspiring countless people across the world.