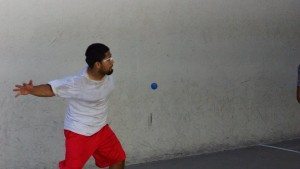 Samzon Hernandez traveled to Tecate as the #2 WPH Outdoor pro and the overwhelming favorite to capture his first Cup title of the year. After cruising to the quarterfinals with a two-game victory over Chris Lopez, “The Machine” was shocked in two lopsided games by Adrian Contreras. “Adrian was diving wildly and making ridiculous gets and kills,” reported Sal Duenas. “In fact, Adrian hit an overhand right-hand roller to the right to seal the match.”

With Hernandez eliminated from the top half of the draw, the opportunity beckoned for a first-time finalist and breakout star. Always in the mix but never quite securing a signature win, Brian Medina seized the opening and summoned his best handball of his Cup career in Mexico. Wins over Shorty Tojin and Edgar Vizcaino placed Medina in his first WPH Outdoor semifinal where Samzon-vanquisher Adrian Contreras awaited. The pair split the first two games, 15-11 and 15-10, and found themselves tied at 13 in the third game for a spot in the final. Medina scored the final two points, officially joining an elite group of WPH Outdoor stars to have advanced to a Cup final.

Mexico’s Victor Martinez was seeking redemption after last year’s heartbreaking defeat in Tijuana’s Cup final to Ricky Ruiz when 8-3 in the tiebreaker to 11, Ruiz scored the final eight points of the match the snatch victory from Martinez. Martinez cruised to the final in Tecate with systematic two-game victories over Frankie De Santiago and “Flash” Tojin to setup a semifinal clash with #2 seed Sal Duenas. Playing through several rain delays, Martinez advanced to the final in two games. “Victor is a monster on those courts,” stated Duenas. “Vic hits ace two-wall serves that are very difficult to defend.”

The final guaranteed a first-time Cup champion, as Medina faced Martinez in a clash of 3-Wall big ball veterans. The pair staged the most dramatic match of the tournament, with Medina taking the first game 15-12 and Martinez evening the match by winning game two, 15-8. The lead changed hands four times in the third game, but Medina eventually grabbed the lead and closed out the match to become just the fifth different WPH Outdoor Cup champion in the tour’s fourth season. “Brian was poised and just had the extra push to pull off the match at the end of the third game,” stated Baja Blowout tournament director Tom Flores. “Brian played two very tight matches in a row against Adrian and Victor and he was able to make the big shots when it mattered most in both matches. I don’t see Brian being a one-time hitter either. I really see him breaking into the elite with this victory.” 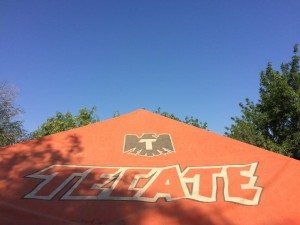 Thank you to the World Players of Handball, Baja Blowout tournament director Tom Flores and WPH Reporter Sal Duenas for the updates from Mexico.