Lucho Week Kicks Off with a WPH Memory Monday! 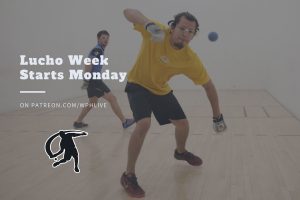 Four-time R48 champion and current R48 #2 Lucho Cordova is featured on WPH Memory Monday this Monday, July 20 on Patreon.com/wphlive and then later in the day right here at wphlive.tv.

Lucho has become one of the tour’s most consistent winners in recent years, collecting four titles since his first R48 win in Atlanta in 2018.

The WPH is excited to kick off Lucho Week this week, starting with Lucho’s WPH Memory Monday.

In addition to WPH Memory Monday, Lucho takes the WPH Rapid Fire Challenge, we will Revisit one of Lucho’s Classic matches, Crunch the Numbers from one of Lucho’s most exciting matches and conclude the week with an exclusive A Juarez Legend interview with Lucho.  You can catch these extras if you are a Patreon pledge supporter of the WPH.  (Patreon.com/wphlive)