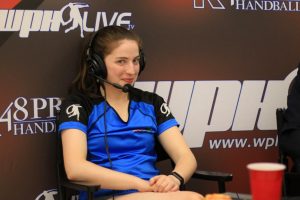 The WPH had a chance to chat with the then 20-year old Catriona Casey in April of 2014, discussing her favorite athlete, her seemingly natural ability, who she admires, her favorite food and more. At the time, Casey had won the first two WR48 events ever held at the 2013 Simple Green U.S. Open and the 2014 NYAC and was three months from embarking on a summer internship with the WPH in Tucson. Since this 2014 conversation with the WR48 #1, Casey has won 20 of 22 WR48 events and never relinquished her WR48 #1 ranking and serves as one of the sport’s greatest ambassadors.

Casey’s summer internship with the WPH back then was a smashing success, as Catriona coached handball for 20 hours a week for 10 weeks to more than 500 youngsters between the ages of seven and sixteen. Casey is now a full-time school teacher in Ireland, successfully balancing training, traveling, working, and winning.

In this interview, we revisit those original questions from 2014, then ask her the same questions today and compare the two.

The full interview is made available on Patreon.com/WPHLive.

Enjoy our revisit with Casey from 2014, HERE>