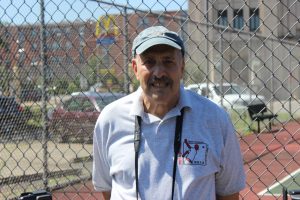 Tucson, AZ, WPH Press, 7/22/17- The World Players of Handball is proud to name WPH ambassador, promoter, donor and videographer Art Haffner July’s WPH Ace of the Month. Art and his equally supportive wife, Louise, are fixtures at all of the Midwest’s biggest handball events, filming and streaming the action live to promote the sport. Art started Team Cleveland Handball to promote and film tournaments, provide a video archive, recap tournaments, preview tournaments and provide newsletters, handball gear and player contact information. Art has also filmed several Race 4 Eight stops and WPH events, greatly enhancing the Race 4 Eight’s coverage. Art has volunteered hundreds of hours each year to grow the sport and bring handball to the masses and has succeeded, receiving thousands of views each month on one of handball’s greatest websites (here). If you run into Art at a tournament, pick his brain on how to grow the game we all love or just say thanks!

The WPH had a chance to chat with “WPH Ace of the Month” Art Haffner on a variety of subjects, including his passion for the game, his best memories in the game, his favorite events, what he thinks can be done to grow the game, what makes handball different from other sports and much more! Check out the fascinating conversation below.

Hometown: Born in Norfolk, VA…lived in Cleveland, OH most of my adult life.

Why does handball mean so much to you: It’s difficult to explain…I just know that I would be lost without it. Maybe because it’s the best all-around workout I know. Maybe because I’m addicted to slapping a small hard round ball. Maybe it’s because of the friends I’ve made. 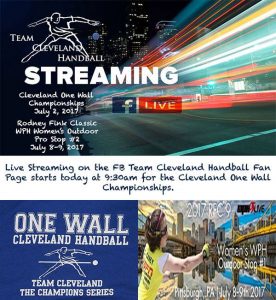 What is your best memory in handball: Cleveland’s Golden Age of Handball. In 1972, I knew nothing about handball. I just returned home from Vietnam and joined the Cleveland Downtown YMCA. At that time, Fred Lewis was a member as well as some other national champions. Watching the caliber of their play gave me the impression that Cleveland was the center of the handball universe. I was inspired to learn the sport.

What has been your favorite handball tournament and why: I don’t get out much. Any well-run tournament where there is great camaraderie and hospitality.

Who started you in handball and what was the first lesson he/she taught you: I never received any lessons, per se. When I was 26, a couple of recent retirees asked me to play with them early in the morning before I went to work. I learned by doing.

Where did you first learn to play handball: Downtown Cleveland YMCA

What inspired you to create the Team Cleveland Handball website (here):

I needed something to give me purpose in my retirement. The website was my challenge to myself to gain greater exposure for a sport that wasn’t growing in the Cleveland area. The internet provided a low cost means of creating a handball community in Ohio at the dawn of the digital age.

Could you briefly explain the Team Cleveland Handball website, its mission and its goals:

·         To showcase a player’s best performances without the viewers’ knowledge of the score.

·         To make handball exciting to those who have never had any exposure to the sport. 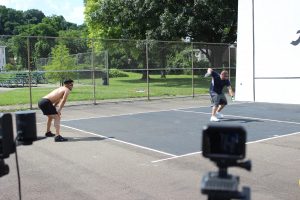 Could you talk about your wife Louise and what she has meant to Team Cleveland and all the work you’ve done to promote the sport: Louise is a great asset to the sport. Her outgoing personality has encouraged other wives to attend and support tournaments. Her attendance at tournaments makes it possible for me to participate in the tournament while she continues with the filming.

Could you briefly discuss the type of equipment you use to stream/film handball: Dave Vincent introduced me to the Mevo camera for streaming. You know I had to go out and buy it. It provides a better streaming resolution than my iPhone. For all other filming, I used the Gopro#5 cameras. They have been the best-suited camera with its 180-degree lens to capture 95% of the court when attaching a suction cup mount to the back-glass wall.

What life lessons do you think can be learned from handball: You must put the time into any endeavor in which you wish to excel. You can only take yourself so far on your own.

In your opinion, what separates handball from other sports:

·         Sportsmanship…Often in local tournaments, matches are self-officiated. Players call wrist shots on themselves and negotiate hinders. In other sports, players rely on referees to catch themselves cheating.

·         No Physical Advantage…Unlike football, basketball, etc., a player’s physical physique does not matter. Players of varying heights and weights have gained success in handball.

Who is your favorite handball pro to watch and why (past or present): I don’t watch enough pro matches…but when I do…I prefer to watch matches in which the games are won by a series of dynamic rallies rather than on serves alone.

What handball pro or handball coach has been your inspiration: Fred Lewis

What does handball need to do to attract more players and grow as a sport going forward and how can this happen:

·         Handball must merge with all forms of popular culture. It must be thought of as “product placement” in novels, artwork, movies, TV shows, live theatre, poetry slams, video games, clothing fashions, etc.

·         Handball must market itself as the “cool sport” with student-athletes. The sport that will put boys and girls on the “A List” with their peers. And the potential for hooking-up with the opposite sex.

·         The success of all professional sports rises and falls with the athlete-star system. Handball needs one or more pros with winning personalities and interesting life stories to be the “face” of the sport.

What do you see in handball today that inspires you? Young players taking ownership of the sport.

What do you see as the future of the sport:

·         As the sport evolves into its many forms, I see survival of the fittest for handball organizations unless they pool their resources. Dance or Die… (t-shirt philosophy).

·         I see the continual elimination of indoor court facilities unless handball allies itself with other sports that share the courts.

Why aren’t more people playing handball: Perfecting your game is a lifetime commitment. Sometimes life gets in the way.

In your opinion, what are the barriers to entry in handball: Players that form cliques that are hostile to newcomers.

What have live ESPN broadcasts done for handball: Pro Handball is still in the ESPN program line-up after 3 or 4 seasons now. There must be enough viewer interest to keep it there. Handball should have been televised from the very beginning when ESPN was so starved for content that its line-up included midget tossing from Australia. I don’t have any data on the effect of ESPN on the sport, but I believe that Pro Handball on ESPN could raise the stature of the sport as well as that of the WPH with advertising sponsors, other networks, and other sports organization decision makers.