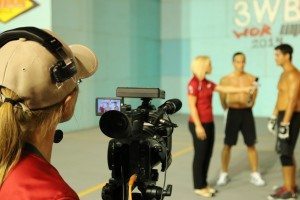 Sunday featured the culmination of a scintillating WPH Outdoor Player’s Cup III season on the famed 3 Wallball courts at the Stratosphere Hotel and Casino, as well the 1-Wall small ball and 1-Wall big ball finals.

Santos dictated play throughout the final, using his unrivaled serve to run Ruiz off the court and earn offensive opportunities. A lethargic Ruiz had no answer for Santos’ exceptional play in game one, losing 15-6. Ruiz would be more competitive in game two, tying the score at 11 and in a position to force a tiebreaker. Santos regrouped and scored four consecutive points to claim the WPH/WOR 3 Wallball championship for the third consecutive year.

Santos would have to wait for Samzon Hernandez’s third place match with Chris Tojin to determine the Player’s Cup champion for the WPH Outdoor Player’s Cup III season. Needing to finish third to claim the Player’s Cup, a sluggish Hernandez lost to an inspired Tojin in two games.

Davis and Groomes faced one another for the second time this season, with Groomes defeating Davis in a match of the year candidate at WPH Outdoor Women’s Player’s Cup III Stop #1 Pico Rivera.

Groomes displayed her steely resolve in overcoming match point in their first encounter and would need to draw upon that resolve in their rematch. Davis built a seemingly insurmountable 14-10 lead in the first game to 15, meaning that she would need to win just one rally out of the next five to win the game. Groomes earned her 11th point with a courageous deep court kill and won the next four points with towering two-wall serves to Tracy’s right and first strike kills. Groomes carried the momentum from her first game comeback to dominate game two, earning her the Women’s Pro 3 Wallball singles title and the WPH Outdoor Women’s Player’s Cup for finishing number one on the Women’s Player’s Cup III season.

“Winning these matches just means so much to me and I do it for my support team that is always there for me,” stated Groomes while receiving her trophies for player of the year and the Vegas championship. “I told myself to train and think like an athlete at this event and to not party while in Vegas and it worked. I can’t wait until next season.”

Ruiz and Timbo entered the event as the number one seeds and undefeated as a team, winning their only two doubles Cup starts at the Vegas LTE Stop #2 and La Mirada Stop #3. Hernandez and “Razzle” Sanchez had long been considered the top doubles team in 3-Wall big ball handball and were determined to regain their doubles crown.

Hernandez and Razzle would eliminate any drama or theatrics early in the final, taking Ruiz and Gonzalez to the woodshed from the outset. Hernadez and Razzle overwhelmed their disjointed opponents and sent a message that they are the top team in 3-Wall big ball handball, winning 15-6, 15-8.

“It feels so great to win here after being in the final the past two years,” revealed Razzle. “My partner trusts me and I trust him and we played really well together today.”

“I really wanted to get the doubles after losing in the singles,” stated Hernandez.

“Great serving,” shouted Vazquez to Bastidas after the match. “Your serves were incredible and you just played too good.”

Despite playing one another over 20 times in tournament play, Daskalakis and Davis had never faced one another in big ball 1-Wall singles. Daskalakis has established herself as the top 1-Wall women’s big ball player in the game, but would have to defeat the greatest ever women’s outdoor player to win the title.

The two NYAC sponsored athletes put on an incredible show for the live audience and ESPN3 viewers, trading the lead 11 times before being tied at 20 in the one game match to 25. Daskalakis had the advantage in the service box, as she consistently hit low angled power serves that were aces or yielded weak returns. Davis stayed close by hitting a number of rekills and fly kills and extending rallies with her incredible athleticism. Davis made two unforced errors at 20-20, and after two Daskalakis kill shots, Daskalakis arrived at match point. Daskalakis closed out the match and her first ever win over Davis with one of her patented left-handed kills.

“I knew I would see Tracy in the finals,” revealed Daskalakis. “She is such a great champion and I am so happy to have won this title.”

Tywan Cook and Delbert Garnett started quickly in the men’s 1-wall big ball doubles finals, building a 12-4 lead. Cook and Garnett maintained their advantage and despite a late rally from Rodriguez and Rosa, clinched the title 25-18.

Thank you to Dave Vincent, Lolita Vincent, Aoife McCarthy, Tanner Cleveland, Matthew Titiano, Linda Manning, Kris Gurrad, Vlad Klym, Jeff Kastner, Steve Soto, Tom Flores, and  Javi Flores for their tireless efforts in organizing the event, running the event and managing over 280 players throughout the week. The 3 Wallball Championships presents the most challenging week of the year for tournament organizers and volunteers, as 100 degree conditions and 20 hour days make the week in Vegas one of the most difficult of the year.

Like the World Players of Handball on facebook, log onto wphlive.tv or follow the WPH on twitter @dfwph and @wphlive for all of the handball news from on and off the court! The World Players of Handball is a non-profit foundation aiming to grow the game of handball through innovation and inspiring the next generation of players through junior clinics with certified WPH coaches, junior tournaments and the Race 4 Eight tour.

Please consider making a tax-deductible donation today and supporting the growth of the game. 100% of donations go towards junior handball development.