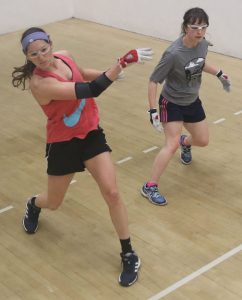 Koehler was dominant in the upper bracket, dispatching Missouri State’s All-America Taylor Rumping in the quarterfinals and fighting off a determined Leslie Amminson in the semifinals. “I really want to win this one!” barked Suz.

The Ageless Wonder (TAW) Jenny Schmitt continued to amaze in the bottom bracket, scraping past the University of Texas’ Kristen Hughes in the quarterfinals and dispatching Missouri’s rising star Mikaila Mitchell in the semifinals.

The final was a rematch of November’s Tucson Memorial WR48 ’17, where TAW defeated Koehler in two games. Koehler was determined to win her first major title on Sunday. “I feel really good going into the final,” stated Koehler.

Koehler played with conviction and purpose in the final, using her athleticism and power to keep Schmitt off-balance and out of the front court. Koehler clinched game one in just 17 minutes. “Suz was really taking advantage of her opportunities, shooting the ball from everywhere in the court and making great kills,” stated WPH reporter Michael Morgan.

Koehler would be pressured in game two by of the best women’s players in history, with the lead changing hands several times en route to 14-14. Koehler proved her mettle, clinching her first major singles title with a 7-0 run to end the match.

“I played really well,” stated an ecstatic Koehler. “Especially in the first game, I wanted to come out with intensity and I was seeing the ball great, making minimal mistakes and moving my feet and getting to everything. I took a timeout at 14-all in game two and mentally pushed the tempo and played super aggressive. I’m very happy with the win!”

To follow all of the scores from the Women’s Open Singles at the 2018 USHA Women’s Classic, go here 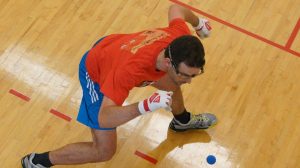 Defending Southwest Regional champion Bernhard outlasted TGG in a two and a half hour marathon in the semifinals, taking game one and being forced to a tiebreaker after failing to convert a match point at 20-19 in game two. “Bernie” seized control in the tiebreaker, taking a 9-2 lead and holding off the Missouri State senior to clinch his second win against the 6’8 superstar in two encounters.

Memo Pallares was pushed to the limit in both games of the bottom bracket semifinal clash against Sam Esser, ultimately overcoming the future star in two close games.

Sparring partners and Texas rivals Adam Bernhard and Memo Pallares met in Sunday’s Southwest regional final, as they have in almost every major Texas final in the past five years. After a slow start in game one that saw Pallares make a number of errors, Pallares found his game, ending rallies with kills from the deep court to take a one game lead. “Losing the first game did not deter Adam,” stated WPH reporter Michael Morgan. “Adam was relentless, hitting passes to keep Memo off-balance.”

The relentless Bernhard applied pressure throughout game two, building a substantial lead to force a decider. “After I got a solid lead, Memo pitched it in for the tiebreaker,” stated Bernhard.

The tiebreaker was close throughout, with Bernhard building a 7-4 lead but never gaining a comfortable advantage. Ultimately, it was “Bernie” who closed out the thrilling third game, 11-9. “I’m so tired,” stated Bernhard. “The match was pretty much back and forth the whole way. I was lucky to pull it out.”

The Texas rivals added yet another layer to their sensational rivalry with this epic final, making the Bernie/Memo rivalry one of the most compelling in the sport.

To follow all of the results from the Men’s Open Singles and all of the brackets at the 2018 Southwest Regional Handball Championships, go here

For more information on the 2018 USHA Women’s Classic and Southwest Regional Handball Championships, go to ushandball.org 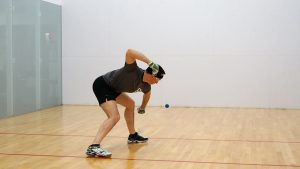 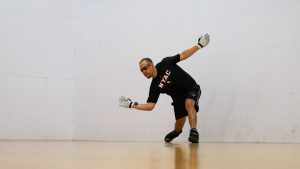 14 of Colorado’s top men’s open singles stars were entered in the Colorado State Championships, with each seeking Colorado’s most prestigious title. Vail resident and R48 #14 Jonathan Iglesias entered the Denver Athletic Club as the favorite, but would have to contend with defending champion and SR48 star Kin Price, Luis Perez, Armando Ibarra, Jr., Stas Hammond, and a great group of contenders.

Iglesias advanced to the final in the upper bracket, defeating SR48 star and perennial national master’s contender Kevin Price in two games. The bottom bracket was the battle of Ibarra brothers, as Armando and Alejandro squared off for a spot in the final. Armando prevailed, ousting his brother in two lopsided games.

Iglesias played flawless ball in the final, never allowing Armando Ibarra into the match and cementing his spot as the top player in Colorado.

To follow all of the results from all of the brackets at the Colorado State Singles Championships, go here