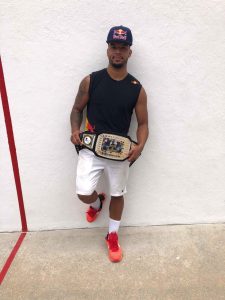 Bronx, NY, WPH Press, 6/6/18– World Big Ball #1 Timbo Gonzalez played the role of Maximus at Richie Vera’s Castle Hill Handball “Battle of the Gladiators,” dominating one of New York City’s 1-Wall Big Ball “Majors” at Caste Hill Park in the Bronx. Gonzalez obliterated the 76-man field in the two-day event on the first weekend in June, outscoring his six opponents by an astounding 126-35 in the Bronx romp.

“This was the hungry Timbo,” stated the 2018 Gladiator champion, speaking in the third person. “I got up at 6 am and ran to the park and jogged three miles Monday through Thursday, ran up and down the stairs in the park for 20 minutes straight after the three-mile jog, kept hydrating with nothing but water and coconut water, and watched my meals most of the time on weekdays, while also playing top singles games five days a week against Kadeem Bush and other top guys to get ready. I wanted to make a statement.”

“I’ve been watching and playing against Timbo for years and I’ve never seen him play like that,” stated WPH #1 Samzon Hernandez, who made the trip from Southern California to compete in the 2018 Battle of the Gladiators.

“I played perfect handball in the Gladiators,” declared Gonzalez, who undoubtedly erased any doubts as to who is the most dominant player in outdoor handball with his virtuoso Gladiator performance. “I wasn’t really myself earlier this year, dealing with injuries, but I’m back now.”

Watch the 2018 Battle of the Gladiator Final HERE

Gonzalez will now take a short break before throwing himself back into training for the upcoming 2018 USHA National WallBall Championships, starting on June 22 in Brooklyn. “The USHA WallBall Championships is another major and I definitely want to keep my momentum going and win that one,” declared Gonzalez.

Stay tuned to wphlive.tv for all of the New York City’s 1-Wall Big Ball majors this summer, to include the King of the courts, Red Bull Slaps, the USHA National WallBall Championships, Big Blue Ballers, and the PHA Open Singles.