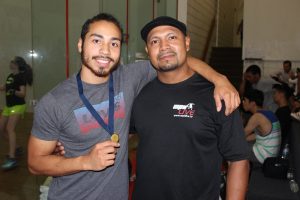 JR WPH Sportsmanship Award and JR Player of the Tournament

Hope in Handball’s Chris Persaud was awarded with the RFC’s Sportsmanship Award for his exemplary sportsmanship on and off the court throughout the weekend at this WPH stop. Hope in Handball’s Serenity Vidot was awarded with the RFC’s “Top Junior Player” for her outstanding play in the singles and mixed doubles. “Serenity is our best player and she definitely deserves the award,” stated David Botero. “She just loves the game and wants to learn as much as she can.” 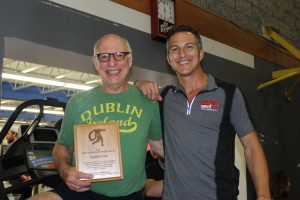 RFC tournament namesake Rodney Fink was awarded with the WPH’s Lifetime Achievement Award for 47 years of serving as a player, coach, ambassador and promoter of the sport of handball and for all he has done for the WPH. Surrounded by his three grandchildren, two children and most of his best friends, RFC, as he’s known, was thrilled with the honor. “The first time I played this game 47 years ago I had a religious experience and I’ve played the game five times a week since that day,” stated RFC.

The World Players of Handball is a non-profit 501(c)3 Foundation that relies on support from handball players and fans. At times, there are those who go over and beyond to help the sport grow and the WPH would like to highlight those over-achievers with special Spotlight Awards.

The spotlight recognizes the incredible time and effort people and athletes put into our incredible game; to include individuals who achieve greatness on the court, while meeting milestones, acting as role models, and leading a strong and healthy life.

Contact us to nominate a spotlight individual that you feel represents the WPH and Handball – info@wphlive.tv 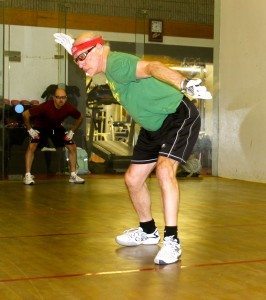