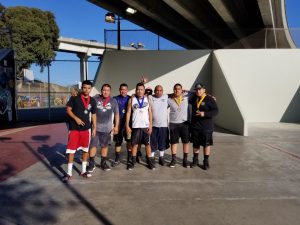 Samzon Hernandez, Alfredo Morales, Oscar Siordia, Noe Garcia, and many others were joined in the stellar field by pro racquetball and paddleball star Emmett Coe. “It was really cool to see the top guys mixing it up in San Diego and to see Emmett Coe enter his first pro handball event,” stated Chicano Park tournament director Tom Flores.

Top-seeded Samzon Hernandez and Noe Garcia cruised to the final in the upper bracket, while Alfredo “El Hombre” Morales and Oscar Siordia battled through the bottom half of the draw to meet Samzon and Garcia in the final. 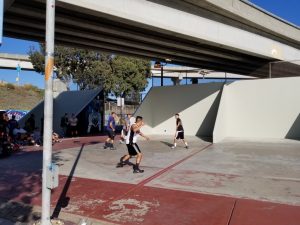 Team Hernandez/Garcia dominated game one of the final, controlling the front court with power drives and fly kills. Team Morales/Siordia regrouped in game two, changing the momentum by playing more aggressively to force a tiebreaker.

Team Morales/Siordia stood just one point from the title in the tiebreaker, leading 11-8 in the first to 12 tiebreaker, win by two. “At that point I knew I had to step in up,” stated Samzon. “I called a timeout and started to play a lot better.” 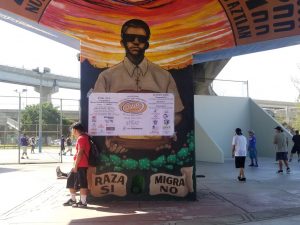 Following the timeout, Samzon killed three straight shots to tie the game at 11, forcing overtime. Team Morales/Siordia fought off match point to tied the tiebreaker at 12-all but Team Hernandez/Garcia would not be denied, as Team Hernandez/Garcia completed their improbable comeback by scoring six of the final points of the match.

“The final was definitely one for the books!” stated Hernandez. 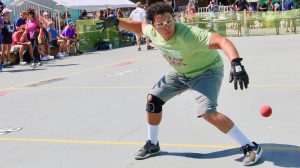 “The final was intense and some of the best handball of the year,” stated Flores.

Chicano Park served as a preview for the upcoming 3WallBall Outdoor World Championships September 26-29, 2019. Expect to see Samzon and the rest of the world’s top outdoor stars in action at the 10th anniversary of the 3WallBall Championships.

WPH press release on the September 26-29, 2019 3WB Outdoor World Championships with hotel info at The Strat and tournament info HERE