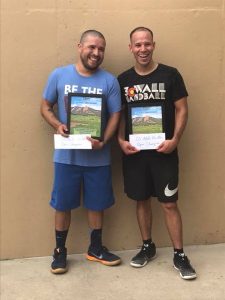 Jonathan Iglesias and Shorty Ruiz teamed up and advanced to the final in the upper bracket without dropping a game, including a two-game thrashing of Alejandro Ibarra and Luis Perez in the semifinals.

2017 Olympic Club singles champion Erik Torres and Olympic Club head handball coach Anthony Collado made the 1200-mile trip from the Bay Area and cruised to the semifinal to setup a showdown with Colorado’s second-seeded Bear Meiring and Armando Ibarra. Team Olympic Club outlasted Team Colorado in two grueling games at 5300 feet of elevation, outscoring the Coloradans by just five combined points in two games to advance to the final.

Team Olympic Club regrouped in game two, pushing the top seeds to the limit. Ultimately, it was Team Iglesias/Ruiz who secured the win. “It felt great playing with Jon,” stated Ruiz. “We have the same doubles chemistry as me and Mando (Ortiz).”

“This is one of the best 3-Wall tourneys,” declared Dr. Moler. “Thanks to the Colorado Handball Association and Brett Nickal. Always a pleasure!”

To view all of the brackets and results from the 2018 Shumate/Costigan CO 3-Wall Doubles, go HERE