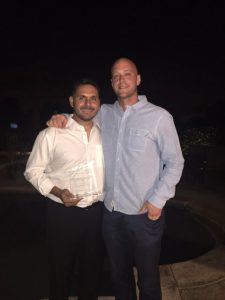 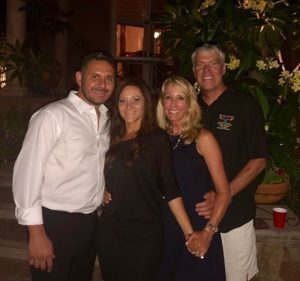 Marcos was joined at the SCHA Hall of Fame induction by his wife and daughter, his dad and brother, his LAAC teammates, and dozens of his handball friends.

“Thank you to the LAAC crew for all of your support,” stated Chavez after his induction ceremony. “You all came out and I really appreciate that you took the time to celebrate with me and my family.”

“I’m glad to see Marcos being inducted into the SoCal Hall of Fame, as he is probably more responsible for the continued growth and balance of handball in the Los Angeles area than he would ever get credit for,” stated WPH Executive Director Dave Vincent. “On the pro tour he is looked up to and followed by the younger players, and I appreciate and respect this from a fan’s perspective and administer of these events. Now, he can be recognized by not only his amazing play and longevity, but also his ability to inspire others to take up the game and/or continue to play the sport of handball.” 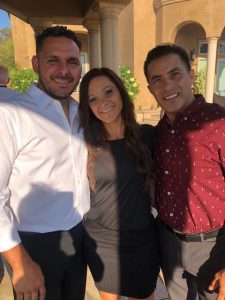 “I can’t think of anyone more deserving to receive this honor than Marcos,” stated Chavez friend Jordan Magged. “Marcos has a way of making everyone feel included. He is an ambassador! I feel like the future of this sport owes a lot to Marcos. Marcos embodies the spirit of this game better than anyone and we all thank you for it. Nice to see you receive this award.”

Despite his hall of fame induction, Marcos has no plans to slow down in his quest for handball greatness. Marcos will team with 3-Wall and 4-Wall national doubles champion Sean Lenning at the World Handball Championships in Minnesota August 13-19, defend his 3-Wall national doubles title in Toledo over Labor Day weekend, and continue to challenge for R48 and SR48 titles in the upcoming 2018/19 Race 4 Eight pro tour season (HERE). Congratulations Marcos!