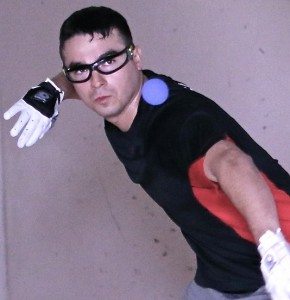 After failing to reach a Race 4 Eight final and sustaining several shocking losses throughout the first nine months of 2015, Luis Moreno has quietly rounded into form since the beginning of October. “The Natural” appeared close to breaking out of his slump at August’s World Handball Championships, losing an 11-9 quarterfinal tiebreaker to eventual finalist Killian Carroll in one of the event’s best matches.

Moreno arrived in Coeur d’Alene, ID for October’s Pre R48 V Plummer Bash seeking a fresh start to an otherwise disappointing year. A dominating two-game semifinal victory against an in-form Naty Alvarado Jr. signaled a return to form. Moreno followed his semifinal victory over “El Tigre” with a sublime performance against Race 4 Eight #2 Sean Lenning in the final, demonstrating the explosiveness and skills that have made Moreno one the 21st century’s best players. Falling behind 11-2 just five minutes into game one of the final, Moreno extended rallies and his opponent, chipping away at the Lenning lead and eventually closing to within two points at 18-20. A horrendous call gave Lenning a side out and eventually the first game, but the 50-minute first-game battle took its toll on “The Freak.” Moreno would score 28 of the next 29 points of the match, only allowing Lenning a slight opening when serving into the ground at 7-0 in the tiebreaker. In defeating Lenning, Moreno avenged a lopsided two-game thrashing at the hands of “The Freak” at January’s R48 IV Houston, Lenning’s first victory against Moreno in seven Race 4 Eight matches. With the Plummer Bash Pre R48 title, Moreno clinched his first significant victory of 2015.

Moreno continued to build upon his momentum three weeks later at the Simple Green U.S. Open, staging a sensational quarterfinal comeback against Irish left-hander Diarmaid Nash, rallying from a seemingly insurmountable 7-1 deficit in the tiebreaker to advance to the semifinal, 11-8. Awaiting Moreno in the semifinal was junior and Race 4 Eight rival Robbie McCarthy. McCarthy had defeated Moreno in successive Race 4 Eight matches, dropping the then Race 4 Eight #1 in the quarterfinals of the Race 4 Eight III NYAC and again in the finals of the Race 4 Eight III Player’s Championship later in the season. In one of the most exciting matches in the history of the Race 4 Eight, Moreno and McCarthy battled for nearly three hours, with Moreno ultimately emerging in an 11-8 tiebreaker. Moreno would lose to the 5-time World Champion and R48 #1 Paul Brady in the finals the next day, but proved his game was back by advancing to his first Race 4 Eight final in 2015 against the strongest field of the year.

“The Natural” started strong in the R48 V Tucson Junior WPH Benefit two weeks after the Simple Green U.S. Open, dismantling Shorty Ruiz in the round of 16 but had no answers for his 2015 World Handball Championship vanquisher Killian Carroll in the quarterfinals, losing in two games to the Irish sharpshooter. Moreno would bounce back to win fifth place, defeating Stephen Cooney and Daniel Cordova.

Moreno defended his 2014 Milwaukee Open title in early December, facing one of the strongest fields in the history of the Milwaukee Open. In a draw that featured three of the top four Race 4 Eight pros and an additional four R48 pros, Moreno cruised to the final, dismantling R48 IV NYAC finalist Andy Nett in the semifinals. Moreno faced Lenning in for the second time in two months in the final, with the pair’s second encounter bearing a striking resemblance to their clash at the Plummer Bash two months earlier. Lenning raced to a huge lead in game one, only to have Moreno close the gap and eventually lose a nearly one-hour first game. Moreno would need just 26 minutes to win the next two games, clinching his second title in two months.

Having won nine of the first 18 Race 4 Eight events from 2011-2014, Moreno holds the distinction of being the second most winning Race 4 Eight pro in the four-year history of the tour. In the final quarter of 2015, Moreno has only lost to World Handball Championship finalists Paul Brady and Killian Carroll and appears poised for another dominant Race 4 Eight run. See Moreno’s recent results below.