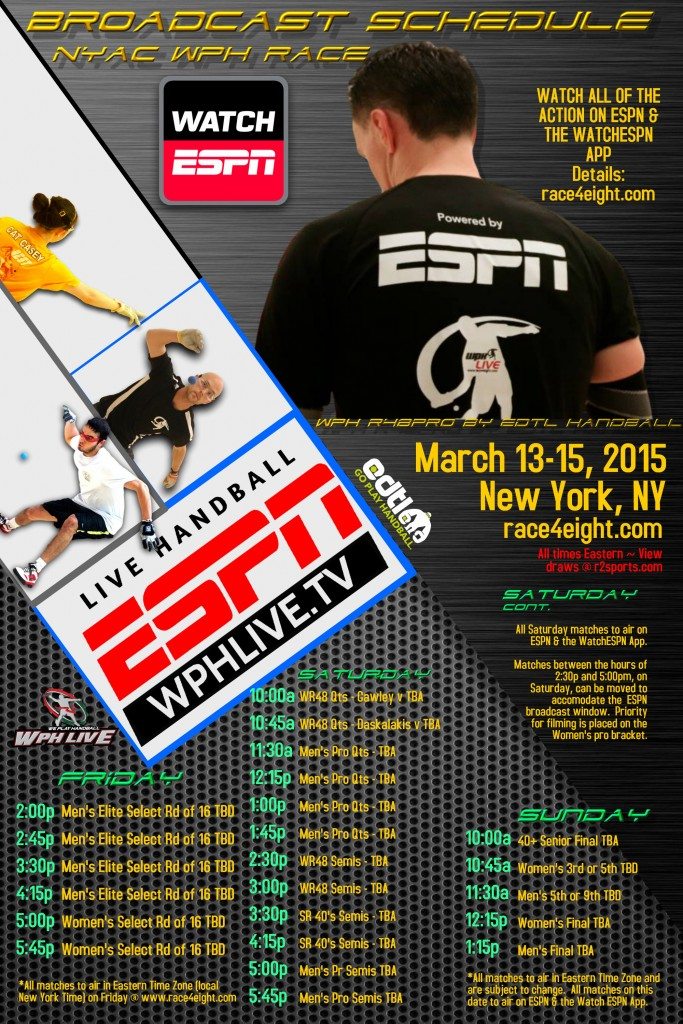 The World Players of Handball, EDTL Handball and ESPN team up to bring you the live coverage of the Race4Eight Professional Handball Tour.  We will have streaming action at www.race4eight.com and ESPN & the WatchESPN App beginning Friday, March 13th.  WPH All Access Pass holders contact us if you are unable to view ESPN’s feed (Wph@race4eight.com).  Please consider joining as a paid member or by making a donation to the WPH Foundation to help offset the costs of filming:  www.thehandballstore.com.  Additionally, please pass along the broadcast schedule and send us your viewing party pics:  wph@race4eight.com

The WPH returns to the “Big Apple” for the second consecutive year for the final regular season event of the R48, WR48 and SR48 tours before the season-­‐ending Player’s Championship in April. The famed New York Athletic Club, home to the best handball in the world for over 60 years, will play host to the best R48, WR48 and SR48 stars on the planet.

Paul Brady and Catriona Casey claimed R48 and WR48 titles in the inaugural Race 4 Eight stop in New York in March of 2014 and both will be gunning for repeat championships in the city that never sleeps. Brady and Casey will also be looking to continue their perfect Race 4 Eight seasons, as Brady aims to complete the first men’s perfect R48 season in history, while Casey aims to duplicate her perfect WR48 season from maiden WR48 season.

The Senior’s will also be in action in their third event of the SR48 III season and New York will guarantee a first-­‐time victor on the SR48 III season. Marcos Chavez and Naty Alvarado won the first two events of this SR48 season, but both have entered the R48 IV NYAC as Elite 8 members, precluding their entries into the SR48.

The Race 4 Eight NYAC is the second Race event held in New York City (NYAC ’14) and the 26th overall event on the Race 4 Eight tour since the inception of the tour at the 2011 Race 4 Eight I Plummer Bash in Coeur de’Alene, Idaho.