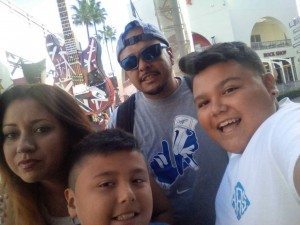 (Seen on the far right w/Family)

Ezequiel Marin was like most nine-year olds whose dad played handball. He started playing when he was seven. He followed him to the courts. He loved it. He grew up playing handball in Hollydale Park, just outside of Hawthorne, CA, playing handball every weekend with his dad, younger brother and cousins. Ezequiel also played soccer, often staying after practice to run extra laps. He was always full of energy but something suddenly changed. He started to feel constantly fatigued, he was losing weight rapidly, he lost his appetite and he was sleeping for 12 hours a day. Four long days of testing at Long Beach Memorial Hospital revealed a crushing diagnosis, leukemia.

Leukemia is a cancer of the blood cells, with the signs and symptoms of childhood leukemia caused by the lack of normal blood cells. The lack of normal blood cells causes symptoms that include extreme fatigue, pale skin, frequent infections and fever, and easy bleeding and bruising. By discovering the best drugs and treatments, doctors have improved the five-year survival rate of childhood leukemia from less than 10% in the 1960’s to 90.4% today (Simon, 2012). While a survival rate may be slightly greater than 90%, learning of your child’s diagnosis is crushing.

“The diagnosis was devastating,” Ezequiel’s father Mario Marin would later say. “We were confused, scared, nervous and very worried. My wife took it very hard. In reality, we both did. It was a devastating blow to our immediate family and relatives.”

Nine-year old Ezequiel felt extremely weak and unable to participate in his normal activities with his friends. “I felt confused,” Ezequiel would say of his diagnosis. “I didn’t really know what is was, but I knew it was serious.” 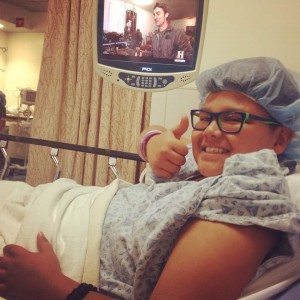 Ezequiel would battle leukemia for nearly five years, spending more than two of those years in the hospital undergoing chemotherapy, with many of those treatments producing nausea and a great deal of pain. When not responding to chemotherapy, doctors would employ a Port-A-Cath to pump the treatment to Ezequiel’s blood through his chest, an extremely painful procedure. The Port-A-Cath involves a 3cm skin incision on the chest wall for the port pocket and a 5 mm incision in the lower neck to enter the vein. The port is placed completely inside the body, with the tip of the catheter sitting in a vein just above the heart (Banerjee, Mehta, 2012).

When Ezequiel was not responding to the chemotherapy he was unable to eat or drink for up to two weeks, surviving solely on medication and IV fluids. Despite the daunting circumstances, Ezequiel never allowed the leukemia to break his spirit. Serving as a source of inspiration for his mother, father, brother and family, Ezequiel rallied those closest to him, never allowing any of those in his immediate or extended family to doubt that he would fully recover.

“Ezequiel was so strong throughout the whole process,” revealed Ezequiel’s proud mother Jasmin San Martin. “Ezequiel never once complained about any clinic or chemo procedure in which he would undergo, even though he knew the treatments would make him feel sick later. Ezequiel always stayed positive and never lost hope. He helped us all cope and would show concern when I would worry about him. He remained so energetic. If you didn’t already know he was sick you wouldn’t have ever known.”

“The strength came naturally,” revealed a precocious Ezequiel. “I knew my parents were sad and I couldn’t let them see me down, so I tried to be as strong as I could. My little brother Jacob would also get lonely and that gave me the strength to get out of the hospital as much as possible so I could spend time with him.” 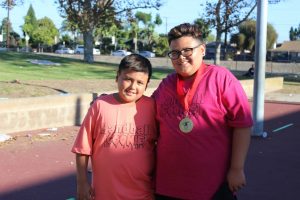 At just ten years old and battling leukemia, Ezequiel became the rock of his family, inspiring them even when feeling his worst. “During one of the most trying periods in the hospital when Ezequiel was unable to eat or drink for weeks, the Eminem song “I Am Not Afraid” came on in the hospital room,” recalled Ezeqiel’s father Mario. “Ezequiel looked at me and said, ‘Dad, I am not afraid!’ The strength Ezequiel showed at that moment brought me comfort in knowing that Ezequiel was such a brave warrior and courageous soldier.”

Ezequiel’s mother Jasmin recalls another moment in which Ezequiel’s courage and fortitude overcame seemingly dire circumstances. After being in the hospital for two weeks because of a bad reaction to chemotherapy that gave Ezequiel nausea and the inability to retain water, Ezequiel was receiving continuous medication and protein bags through IV fluids throughout the day and night. “I prayed and I cried inconsolably to God to please help my son. Minutes later Ezequiel turned and looked at me with a smile and said, ‘Mom, I’m hungry.’ Right after he said those words he said he felt a warm sensation all over his heart and felt like someone was telling him that everything was going to be ok.”

Ezequiel channeled not only Eminem, but also his love for handball in fighting his courageous battle with leukemia. Being around the Southern California handball community proved to be as healing as any therapy, with Ezequiel warmly embraced at every handball park in Southern California. “Most kids (with leukemia) were unable to leave the hospital, but for whatever reason I was able to receive the treatments and go and play handball. Just being around the courts and receiving the support from the handball community made a huge difference in my recovery. The love and support shown to me was really cool and made me want to go to the courts and see everyone and play.” 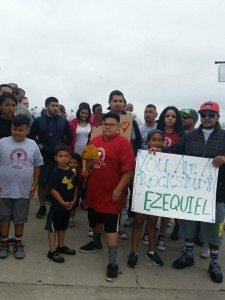 Following handball from the hospital also proved to be incredibly therapeutic for Ezequiel. “Samzon Hernandez is my favorite athlete in any sport,” boasted Ezequiel. “Handball was a huge motivator for Ezequiel to leave the hospital and go to the courts and watch and even play when he was feeling strong enough, especially when he had an opportunity to watch Samzon” recalled Ezequiel’s father Mario. “Most kids suffering from leukemia and the treatments didn’t have the strength to leave the hospital but somehow Ezequiel did. Having the opportunity to follow Samzon’s success in maintaining his spot atop 3-Wall Big Ball handball during his treatment meant a lot to Ezequiel. At six years old and before his diagnosis, Ezequiel would go to the courts to watch Samzon and scream, ‘Samzon is number one.’ Samzon signed the winning ball from the La Mirada doubles and gave it to Ezequiel and he was incredibly appreciative of that.”

Mario was perhaps as grateful for the support from the handball community as Ezequiel. “Playing handball and going to the courts was my escape during Ezequiel’s treatment. There were times when I would get choked up on the way to the park and start to wonder why this happened to Ezequiel. Those who know me know that I always have Ezequiel and Jacob with me every time I go to the courts. The handball players would always ask about Ezequiel’s condition and showed me that there are true friends in the handball community.”

Ezequiel inspired not only his family, but also many of those who knew of his condition within the handball community.

“Ezequiel’s courage is inspiring to me just for the purpose of his fight,” asserted Ruiz. “Ezequiel showed us professionals how to overcome adversity by never giving up.”

“Ezequiel is a huge inspiration to me,” expressed Southern California handball ambassador and WPH Outdoor tournament manager Tom Flores, echoing the sentiments of Ricky Ruiz. “Ezequiel was so brave and strong. Those that were aware of Ezequiel’s condition showed tremendous support for Ezequiel and his family, while themselves being inspired and touched by Ezequiel’s courage.” 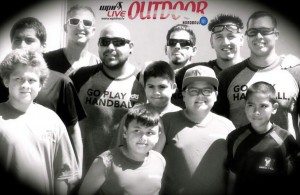 Leukemia Free and The Future

After nearly five years of treatment, Ezequiel was deemed to be leukemia free by his doctors, enabling him to resume the activities of a healthy young person. One of the leukemia-free highlights for the Marin family was being able to share their passion for handball together.

Mario started playing handball nearly 15 years ago, relishing the competition, the handball culture and watching the juniors playing the game, but mostly being able to share the game with his two sons. Much like his father, Ezequiel loves the competition, as well as watching the pros and the techniques involved with becoming a top player. Nearly every weekend serves as a family reunion at the handball courts for the Marins, as Mario, Ezequiel, younger brother Jacob, uncles, and cousins play together.

“When Ezequiel was undergoing treatments there were long stretches of time he was unable to spend time with his younger brother Jacob and because Jacob was only five or six years old, he couldn’t understand why Ezequiel was sick all of the time and felt neglected,” recalled Jasmin. “Being able to go to the courts together and play handball gave them that brother-bond again.”

The father-son handball dynamic can be complicated, but Mario and his sons embrace every moment they are able to spend together on the court.

“Being able to play together as a family is a true blessing and playing handball is a natural love for both of us,” stated Mario. “Both Ezequiel and Jacob share the passion and it makes me proud every time I see them playing.”

“It’s really cool and fun to be able to share the court together,” explained Ezequiel. “I usually play with my dad against Jacob and my older cousin Jonathan in very competitive matches. My dad always pumps me up while we are playing.” 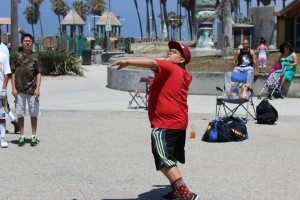 Surviving leukemia provided a unique outlook for the now 15-year old high school sophomore Ezequiel Marin, a perspective most teenagers could never grasp. “The experience (of beating leukemia) showed me a lot and I learned a lot from it,” explained Ezequiel. “I feel like a better and stronger person and more capable of doing other things after defeating leukemia. Other kids may really only think about how things affect them, but battling leukemia provided me with a broader perspective.”

Ezequiel will use that perspective when he turns 16, as he will serve as a junior counselor for younger kids who are fighting cancer at Camp Dream Street. The camp is a four-day overnight camp in which young kids battling cancer will have the opportunity to spend time with cancer survivors in a fun environment intended to lift the spirits of those experiencing difficult circumstances.

“Ezequiel is a very compassionate and caring young man, especially with kids that have gone through the same experiences that he has,” explained Ezequiel’s mother Jasmin.

Ezequiel carries his selfless spirit to the handball court, experiencing his most satisfaction when coaching his younger brother Jacob. “I want to help Jacob improve and see him win a championship someday. Jacob is only 10 years old but he is so talented.”

Both Ezequiel and his brother eagerly await each WPH Outdoor junior tournament, often being the first junior players to register. “Ezequiel tells me to let him know when the WPH Outdoor tournaments are because he always wants to play,” revealed Flores.

Ezequiel shares his passion for helping others and handball with being creative, challenging himself and learning new skills, particularly in making short films and participating in school plays. “My dream is to someday direct major motion picture comedies,” stated Ezequiel.

With the courage, resiliency, maturity and compassion Ezequiel Marin has demonstrated at such a young age, there is likely nothing he cannot accomplish.