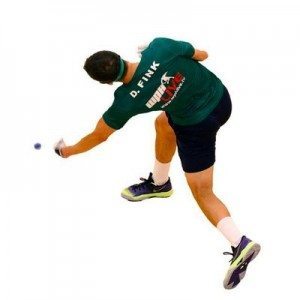 To check DF’s recap of the action from Saturday at the U.S. Open, click here: https://wphlive.tv/saturday-at-the-simple-green-u-s-open/

Paul Brady responded to Moreno’s boasts of “crushing” him in his semifinal post-match interview by crushing the WPH R48 #1, 21-8, 21-4

Catriona Casey extended her undefeated Race history by winning her fourth event in four WR48 events. Casey is the only player to have ever started a Race event to have never lost a match in Race play

Courtney Peixoto de Melo returned to women’s pro handball after a near three-year hiatus to almost make the semifinals of the U.S. Open. CPM played one of the event’s best matches, losing to WR48 #3 Jessica Gawley in a thrilling 11-8 tiebreaker in the WR48 quarterfinals

Charly Shanks showed that he is not far from the form that saw him end the R48 II season at the #1 ranked player, defeating Sean Lenning, Emmett Peixoto, and Naty Alvarado and pushing Paul Brady to a tiebreaker in the U.S. Open semifinals

In three career singles appearances and one career doubles appearance in the 3-Wall big ball at the U.S. Open, Samzon Hernandez has never lost a match, collecting four titles in four years

Tywan Cook advanced to the finals for the second consecutive year at the Simple Green U.S. Open 1-Wall big ball, this year claiming the doubles title with partner Carlin Rosa after losing in the final of the singles in 2013

Thank you to Mr. Bruce Fabrizio, Naty Alvarado Sr., Jeff Hyder, Mark Shelgren, the entire Alvarado family, the entire “Green Team” at Simple Green, and all of the volunteers who continue to make the Simple Green U.S. Open such an incredible event

Do you want to ask any of the top pros a question? Send them to fink@race4eight.com and your question will be answered by your favorite pro and included on an upcoming Monday Morning Serve!

Remember to send all handball-related questions to fink@race4eight.com or tweet to @DFWPH and you might have your question answered on the MMS.

What are some good left-handed ceiling shot drills?

How many shots are there that a handball player can use?

By my count there are 24. If you count the crazy shots that Sean Lenning, Shorty Ruiz, and Dave Vincent attempt and make, there are probably more like 40. If you are playing by the fundamentals, there are 24. Only those touched with handball greatness can consistently make more.

-Jose C, New Mexico
Who are some great up and coming R48 players?

There are a lot of great players rising right now. Stephen Cooney, Shorty Ruiz, Daniel Cordova, Luis Cordova, Erik Torres, Anthony Selestow, and Abe Montijo are on my short list of early to mid 20’s guys who are on the rise. Some of those guys have already been ranked for three years but are still improving and heading for the top eight