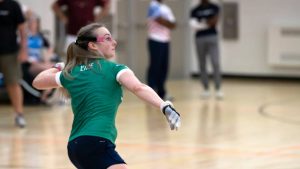 Unsure if she would enter the Wall Ball singles, McMahon decided close to the deadline to participate at the request of GAA Handball. “I really had no expectations in the Wall Ball, I suppose,” admitted McMahon. “I really didn’t prepare for the Wall Ball, which is not something a Senior handballer should say, but it worked out anyways.” 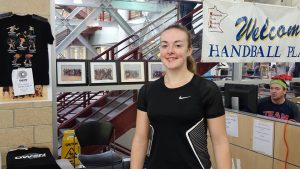 McMahon stunned the defending World Wall Ball champion Danielle Daskalakis in the Wall Ball final, just three years after losing decisively to Daskalakis in the 2015 Wall Ball World Championships. McMahon seized game one, nearly rallied from an 11-20 deficit in game two, then pulled away in the tiebreaker by scoring six of the final seven points of the match to become the first Irish player to win an Open Wall Ball World Championship.

McMahon then turned her attention to the 4-Wall Open singles, where she served as the Team Captain for Ireland following a dramatic 21-20 third game victory in the 2018 All Ireland 40×20 Championships over rival Catriona Casey. McMahon entered the 4-Wall singles and the third seed but played like the favorite from the outset, dismantling 2017 USHA Four Wall Nationals finalist Tracy Davis in the quarterfinals and eliminating two-time defending Women’s 4-Wall champion Aisling Reilly in the semifinals with shocking ease. Only Women’s Race 4 Eight #1 and four-time defending USHA Four Wall National Champion Catriona Casey stood in McMahon’s way in the final.

McMahon started brilliantly in the final, racing to a 13-3 lead by simply overpowering the normally indomitable Catriona Casey. “I’ve never seen a woman hit the ball as powerfully as Martina,” declared McMahon quarterfinal victim Tracy Davis. McMahon withstood a Casey comeback in the second half of game one but would not be deterred as the game became close, continuing to go for her shots and seizing a one-game lead, 21-18.

Casey appeared to have adjusted to McMahon’s offensive power attack in game two, as the pair stood even at 12 midway through game two. McMahon elevated her game to the next level with the championship just nine points away, opening up her full arsenal of power serves, blistering pass shots, and bottom-board kills to score the final nine points of the match to add the 4-Wall Open singles title her Wall Ball title.

“This is a dream that became reality,” stated and ecstatic McMahon surrounded by her family who made the trip to support her in Minnesota. “I said three years ago that this is what I wanted to win and it’s happened so I’m over the moon. I’m 23 and I suppose at my peak now.”

“Martina gave up football three years ago to focus on handball and it was the best decision she ever made,” stated Martina’s mom Rose. “She’s been training so hard for this and I’m just so happy for her.”

“I don’t think I’ll ever be able to top this,” stated McMahon.