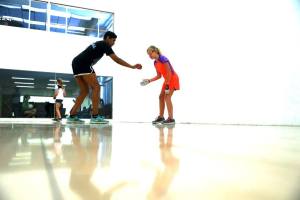 Junior WPH is proud to have provided opportunities for thousands of youngsters to learn and play handball the right way through the first half of 2015. After hosting more than 1200 junior handball clinics and introducing the game to more than 4000 young people in 2013 and 2014, Junior WPH furthered our mission to grow the game in 2015 by sponsoring flourishing junior handball programs, starting new junior handball programs and providing youngsters with the best coaches and opportunities to develop the passion to play handball. Junior WPH focuses not only on proper handball fundamentals, but teaching sportsmanship, integrity, discipline, leadership and camaraderie through handball. Check out what Junior WPH has accomplished through the first half of 2015!

“These teenagers are immensely talented,” revealed Fink. “Both will be pros in the near future, as each possesses a tremendous passion for the game and incredibly well-developed skills.”

“The clinic was a huge success, as UWF team members and several new players participated,” revealed UWF Handball Club Founder and handball ambassador Michael Morgan. “Daniel and Luis provided useful tips that players were working on throughout the clinic and the next day at practice. After a thrilling exhibition match, which saw Luis come back from a 9-10tiebreaker deficit to defeat WPH R48 Rookie of the Year Daniel Cordova, Luis and Daniel played doubles with several members of the team. From everyone with the University of West Florida Handball Team, thank you to Luis and Daniel and the WPH for putting on a great event.”

Junior WPH will continue its ambitious junior handball initiatives in the second half of 2015 with after school and weekend clinics across the country, the “Battle of the Border” junior team competition in Tucson between Junior WPH Juarez and the Fred Lewis Foundation, clinics and junior handball tournaments at WPH Outdoor events and much more. Stay tuned to wphlive.tv and juniorhandball.org for all of the exciting junior handball updates.