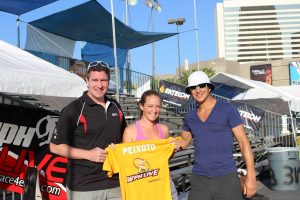 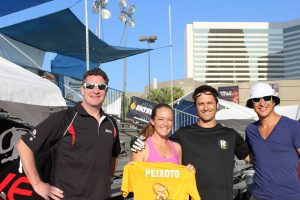 Summary: Jessica Peixoto arrived on the Race 4 Eight scene in 2013 as the girlfriend to then #6 R48 pro Emmett Peixoto but quickly established herself as much more. Now Mrs. Peixoto, Jessica has currently attended 16 consecutive Race 4 Eight events as a fan, a record unmatched in the history of the tour. Mrs. Peixoto was awarded her first yellow jersey in 2014 for winning the Race 4 Eight 3 Fan of the Year and has since added to that total with two more year-end fan honors. Jessica serves not only as a fan, but also a coach and sounding board to her husband, always offering encouragement and positive thoughts to the Race 4 Eight’s ironman. Mrs. Peixoto is not only a fan of her husband, but to all of the Race 4 Eight stars and can always be seen watching the matches of all of the top players and supporting great shots and rallies. In addition to being the Race 4 Eight’s undisputed top fan, Jessica has been interviewed courtside more times than any player or fan by ESPN’s Kara Mack. Look for Jessica to add to her year-end honors at the end of the Race 4 Eight 6 season