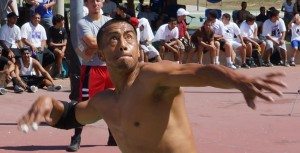 From: Orange, CA
Size: 5’9, 165 lbs
Arm: Right handed
Who taught you: Basically learned on my own, with desire to always be a bit better
Home courts: El Modena H.S. Orange Ca
Where I play now: Boissenrac Park, Buena park
Profession outside HB: Construction Business
Coach: Dont have a coach, looking for one…… What is your fee???

Best ever: I personally think that this guy named Chuchin was the best and so far nobody has being able to do what he did here in Cali and that includes Gollo. Chuchin beat every single player in their own courts and he would never disrespect anybody, even if he had a reason. He won every tournament, random $$$ games; he was a true athlete. A beast! After him, there is Gollo (whom I wish I can still play the way he does when I get to be his age!!!!)

Comments: G’Man is a handball player in a gymnast’s skin. He floats around the court like a cat and is easily one of the most athletic players handball has ever seen (small or big). You have not seen big ball until you watch at least one G’man match! Fan favorite!