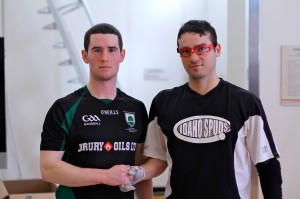 What do you do for work: Investment analyst studying to become an actuary

What are your goals in handball going forward: Determined to be the best I can be and test my skills against the best players in the game today

What do you love about handball: The opportunities to travel and the competition

Favorite pro player (now or ever): Paul Brady, Tony Healy and Eoin Kennedy because that trio set the standard for young players in Ireland by changing the mentality of Irish players and brought new levels of handball to Irish handball

How would you describe your game: Adaptable with the ability to modify my game to counteract my opponent’s overarching strength

What is your best shot: Fly kill

Given the choice, what top R48 would you most like to play: Paul Brady

Who has inspired you to play this game at such a high level: Brady, Healy, Kennedy

Diarmaid Nash’s quiet personality and unpretentious style of play belies a driven athlete who is determined to “be the best I can be” and an eagerness to test his skills against the best players in the game today.

Nash was already known in his native Ireland as a player on the rise when he made his professional debut stateside at the USHA Four Wall Nationals in Des Moines, Iowa last June.  He announced his arrival as a player to watch for years to come when he ousted number four seeded  Emmett Peixoto in two games.  Nash outplayed one of the best retrievers in the game by simply out-retrieving him.  Peixoto met his version 2.0.

“Nash is extremely fit and is great at retrieving, very similar to Emmett Peixoto,” stated former WPH #1 Charles Shanks.  “His style of play is quite different to what players are used to seeing.  He hits very few power shots. His greatest strengths are his “Healy-like” ability to control rallies and then end them with deathly soft touches in and around the frontcourt.”  Shanks’ reasoning includes firsthand experience of Nash’s court abilities; the two players faced off at the Irish Nationals in 2011 and Nash came out on top with the upset win over Shanks.  Nash counts this victory as one of his best to date.

Nash finished third overall at the US Nationals when his quest for the singles title was halted in a two hour plus match against fellow countryman and eventual finalist Martin Mulkerrins; it should be noted that Mulkerrins also happens to be Nash’s favorite pro player.  Nash’s second appearance in the states was equally impressive as he battled WPH #1 ranked Luis Moreno to a tiebreaker in the semifinals at WPH R48 III Stop #2 at the Simple Green U.S. Open, pushing the eventual champion to the limit in a two hour and 45 minute thriller.

The 23 year old County Clare, Ireland native began playing handball at 8 years old and credits Eoin Kennedy, Paul Brady and Tony Healy for inspiring and influencing his high level approach to the game.  “That trio set the standard for young players to follow back when no Irish players could even compete with the Americans,” Nash disclosed.  “They changed the mentality of (the game)…and brought handball to new levels of fitness and style (in Ireland)…three contrasting styles but very effective.”

Left-handed, Nash describes his game as “adaptable” and counts his uncanny ability to modify his game to counteract his opponent’s as overarching strength.  His self-assessment is supported by a playing style which embraces components of the three contrasting yet effective styles of play: Kennedy’s methodically superb defensive-offensive shot making; Brady’s impeccable positioning and timing; and Healy’s adeptness to control rallies and take opponents out of their comfort zone.   Nash would love to test his adaptability skills against the current World Champion and US National Champion Paul Brady, who he has yet to play in competition.

Nash is the current Men’s Irish Seniors National Champion and 23 & Under World Champion, two of his best tournament wins so far.  This past weekend he added the 5th Annual John Gaffney Memorial Tournament to his resume where he defeated role model and two-time Gaffney Tournament winner Kennedy in the semifinals and outlasted two-time defending champion Robbie McCarthy in a tiebreaker after losing the first game, scoring 20 or the last 22 points in the match.  Nash is pleased with his performance at the Gaffney Tournament as much for the improvement in his standings compared to last year’s showing, where he lost in the quarterfinals, as for the win.  “To get the result at the end of a tough weekend is really satisfying,” said Nash. “It’s a nice way to start the season and hopefully I can keep it going.”

Nash does not have much time to bask in his most recent triumph, as he will be heading back to the United States for the third stop of the WPH Race 4 Eight III tour in Houston, TX.  Play begins Friday, January 24th and once again features a loaded field of talented handball athletes vying for not only the win, but also points towards an invitation to the Race Player’s Championship in Salt Lake City in April.  Nash will stick to his formula of training hard on the court with regular sparring partner Niall Malone and cross training.

Nash works as an Investment Analyst for Towers Watson, a risk management-consulting firm that offers global services.  Handball allows Nash to indulge in his love of travel to different tournaments to compete around the world. Nash discovered his love for traveling at just 16 years old, while also revealing his fiercely competitive nature and unparalleled attention to detail. In an Irish handball trip to Spain’s Basque region, Nash competed in 1-Wall handball for the first time. “I lost every match I played in that weekend and is still hurts,” he recalled seven years later with uncanny accuracy. ““I did learn an incredible amount about 1 wall in those 4 days, probably the best crash course I’ve ever gotten…mixing with people from different cultures and just experiencing life in Azkoitia is something that will stay with me for the rest of my life.”