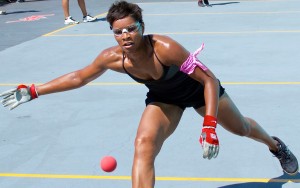 The 64th USHA National Three Wall Championships produced incredible drama throughout Labor Day Weekend and featured the two best men’s and women’s 3-Wall stars on Finals’ Sunday. Players were greeted by hot and muggy conditions with the humidity nearing 80%, making fitness an even greater factor in the game’s most grueling code of handball.

Defending champion and number one seed Tyree Bastidas defeated Loren Collado, Billy O’Donell and Nik Nahorniak to reach Sunday’s final. Already the holder of the 1-Wall national and world championship and the 3-Wall national championship, Bastidas would aim to defend his crown of unprecedented outdoor supremacy.

Sean Lenning arrived at his favorite event seeking his sixth 3-Wall national singles championship. Entering the event as the number three seed on the heels of a semifinal loss at last year’s event, Lenning advanced to the finals with wins over Ryan Bowler, Jurell Bastidas and a comeback victory over Southern California’s Shorty Ruiz in Saturday’s semifinals.

Lenning defeated Bastidas in a thrilling 11-8 tiebreaker in the 2012 3-Wall final in the pair’s last encounter in Maumee, but Lenning would ensure that there would be very little drama in this final. Lenning raced to a one game lead over Bastidas in the final, overwhelming the defending champion with power and a virtually unreturnable serve. “Lenning was serving almost exclusively down the right wall, just over the short line,” declared WPH reporter and live broadcast analyst Rodney Fink. “Sean hit at least six aces down the right and even though Tyree knew the serve down the right was coming, he still could not return it. Tyree just could not get into the game.”

Lenning built an 11-4 lead in game two before a Bastidas rally evened the game at 11, but Lenning shifted to another gear and reclaimed his cherished 3-Wall title, 21-7, 21-12. “Sean was just too powerful for Tyree,” revealed Fink. “He consistently hit the ball harder throughout the rallies and dictated play. Sean also imposed his will on Bastidas and there was just nothing Tyree could do.”

“Premature, I know, [but]…This is Lenning’s sixth 3-wall singles national title (11th between doubles and singles) and virtually assures him his spot in the hall of fame,” revealed WPH Executive Director David Vincent.

Megan Dorneker was seeking her record ninth USHA National Three Wall Singles Championship, while Tracy Davis was aiming for her second. Davis has struggled against Dorneker in Maumee, winning only one of their previous 3-Wall encounters. Davis demonstrated a vastly improved left hand to go along with her unparalleled fitness and sensational court coverage.

“I don’t know how I did it,” revealed an overjoyed Davis after the match. “I think that was one of the best matches that I have ever played.”

Watch Tracy Davis, Tyree Bastidas and the rest of the game’s best outdoor stars compete in the 2014 WPH/WOR 3Wallball World Championships live on ESPN3 September 12-14. Click onto http://espn.go.com/watchespn/ to catch all of the exciting action live from the Stratosphere Hotel and Casino on the Las Vegas Strip!

Thank you to WPH reporter and Gold Donor Rodney Fink!