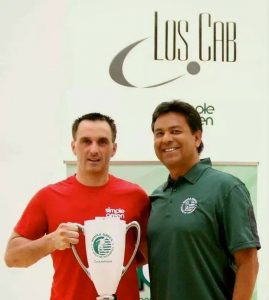 Legends Corner: Naty Alvarado, Sr.
Chasing Down El Gato
WPH Patreon Exclusive
Naty Alvardo Sr. is synonymous with greatness in handball, as “El Gato” dominated the sport for more than a decade with grace, power, humility, and class. Alvarado Sr. ushered in a new era of pro handball, taking two-handed offense, power, and aggressiveness to the forefront of the sport and reshaping the game for generations to come.
El Gato won 63 USHA Spalding/Gatorade Pro Stops, retired with a then record 11 USHA 4-Wall pro singles titles, teamed with Vern Roberts to dominate 3-Wall and 4-Wall national doubles and won hundreds of weekend tournaments.
Alvarado retired from professional handball at the age of 36 and quickly transitioned into one of the sport’s greatest ambassadors and promoters. Alvarado teamed with good friend Mr. Bruce FaBrizio and Simple Green to host the Simple Green U.S. Open of Handball in Southern California, combining 4-Wall, 3-Wall, and 1-Wall handball to create handball’s Super Bowl every October for more than a decade.
More important than all of his titles and his passion for growing the game was always El Gato’s family, who all live within walking distance of him today in Hesperia, CA.
Naty Alvarado, Sr. has long been one of handball’s most likable and respected champions and handball’s greatest champion was kind enough to sit down with the WPH in a wide-ranging four part interview discussing his start in the game, his greatest rivals, his breakthrough moment, his move from Mexico to California, his coaches and mentors, and so much more!
In Part One of Chasing Down El Gato, Naty Alvarado, Sr. discusses where he grew up, explains the reasons behind his incredible left hand; details his start in handball, discusses his greatest influence in handball, qualifying for the tour and moving to California, plus learning to play against then number one Fred Lewis and so much more.
Part one of the four-part interview series just posted to patreon.com/wphlive, so. . . . go check it out!  There will be a new part posted to Patreon each day this week.
ShareTweet
Subscribe