Ben Manning was a camera operator at all WPH ESPN gigs for the past three years.  A reliable, hard-working man who gave his own personal time to help grow the game of handball.  Today, Mr Manning lost his bout with cancer and passed in the early hours.  He will be missed by those that he captured on film and will forever be apart of the WPH Film Team.  The 2017/18 Season will be played in his honor. 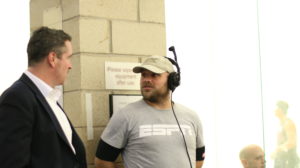 Ben’s Obituary – It is with great sadness that the family of Benjamin Manning announces his passing after his battle with cancer, on  June 6th, 2017, at the age of 40. Ben is lovingly remembered by his wife, Stormie and his children, Guiles, Alexsys, Gabriel, and Hunter. Ben is also remembered by his mother, Linda, his siblings, Author, Anna, William, Stephen, Faith, Peter, and Jeremy. And many extended family and friends.

A Celebration of Life will be held on Ben’s birthday, Monday, July 31st, 2017 at 2:00 p.m., at Battle Ground Lake State Park, 18002 NE 249th St., Battle Ground, WA 98604.
Please join us to celebrate his life and the memories he left us with. Those who knew him best, know he wouldn’t want a sad remembrance, so lets celebrate the life he lived as a father, son, brother, and friend.
ShareTweet
Subscribe
Event Calendar