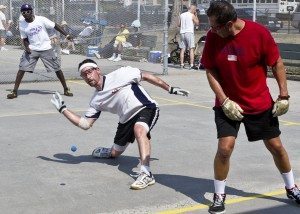 About the author – Dr Zimet is a Licensed Psychologist and sports psychology specialist who has worked in private practice for over 15-years. As a player, Dan has 22 National Titles as of May 2015, and he has also won numerous state and regional Open level events. He is one of a select few players to have won a National Title in 1, 3 and 4-wall and he is the only player to have won five straight age-bracket titles within a division (2010-2014 40+ 3-Wall Singles). In addition to being a USHA recognized coach and referee, Dan was the Maryland Handball Commissioner for ten years. He has instructional articles published in the USHA Handball Magazine on the topics of Doubles Strategy and The 3-Wall Serve.

You don’t have to be an Open level player or win national titles to have a great experience and be a successful handball player.  Joy of competition, getting pushed to the limits of your ability, and the thrill of hitting a great shot affects players equally on all skill levels.  The love of our ‘perfect game’ drives each of us to seek out new ways to improve in a never ending quest to beat the player(s) just ahead of us on the ladder.  Understanding your handball game is a critical part of that development, and one of the favorite pastimes of athletes everywhere is analysis.  Off-court chatter is almost always an assessment of familiar players, with frequent comparisons made to one’s own game.  I often hear comments like, “I wish I could hit that serve.”  “Why doesn’t he shooting more?”  “That was a bad choice, she should have gone left.”  “I need to develop a punch pass.”  Handball, like many sports, seems simultaneously simple yet impossibly complicated.  Why is it so hard to make changes to your game?  How is it that shots seem so easy when warming up or during practice games, but don’t fall during competition?  Why it that the right shot appears so obvious when watching someone else play?  Fitness, flexibility, weight, footwork, anticipation, percentage shots…The answers to our questions can seem so elusive, making it tough to know exactly how to become a better player.

Numerous articles and books are written to coach athletes on methods for improving their game; yet nearly all of these resources are specific to the physical elements of a sport, and it is important to understand that there is a (sometimes blurred) distinction between physical coaching and mental coaching.  A Physical Coach focuses on physical/motor skill development, strategy and training (e.g., practice and fitness).  For example, Physical Coaches could help a handball player work on shot mechanics, develop off-court training regimens, and evaluate shot selection and strategy.  Far less attention is paid to the mental side of sports, despite wide-spread awareness of how deeply the psychology of sport affects performance.  A Mental Coach, or Sport Psychologist, addresses a range of issues, including but not limited to the following:

How Important are Mental Skills?

Experts throughout time have looked at the most elite performers of their day in an effort to determine the factors which contribute to optimal performance.  We marvel at athletes that dominate their peers in a way that transcends sports and can redefine the game itself.  Over the last half-century, researchers have made a more focused effort to study specific factors distinguishing these super-elite achievers from those who fall short of that apex.  The result of these efforts has contributed to a robust literature addressing patterns of thought and behavior useful for all athletes looking to improve their game.  Interestingly, it is rarely unique physical gifts that separate the great from the almost great.  In fact, the physical differences between athletes at the most elite level of sports is negligible.  The distinguishing factors are almost always mental dominance.  For example, a 1995 study of professional baseball players found that psychological skills, not physical skills, predicted pitching performance and whether that player would still be playing in the MLB 3 years into their career.  In another study comparing Men’s Gymnastics Olympic qualifiers to non-qualifiers, they found the qualifiers did not differ in physical abilities but did differ on the following mental factors: coped more easily with competitive mistakes, better able to control and utilize anxiety, higher self-confidence, more positive self-talk, more gymnastic-related dreams, and more frequent use of imagery.  In short, elite athletes exhibit very few physical differences and these differences are weakly and sometimes not at all predictive of success.  As stated by Jack Nicholas, universally considered the greatest golfer of all time, “90% of golf is mental…mental preparation is the single most critical element in peak performance.”

Being in the Zone

One of the earliest research focuses had to do with peak performance, or states of flow, where an athlete experiences an ideal body-mind state often described as being “in the zone.”  These moments, often short-lived and illusive, are a confluence of perfect mental and physical harmony where performance feels effortless, completely controlled, euphoric, and timeless/apart from time.  By putting together interviews with elite athletes, researchers have identified the following criteria as defining these states of flow: fearlessness – no pressure or fear of failure; total immersion in the activity; narrow and total focus of attention in the present; time/space distortion/everything slows down; performance feels automatic and effortless; high confidence; and a control paradox – feeling in complete control but not needing to or trying to be in control; no thought of outcome (i.e., winning or losing) – only process (i.e., that exact moment).

While athletes are unable to purposefully enter these zone states, coaches and researchers have found that a range of behaviors markedly increase their frequency.  Elite athletes engage in mental and physical readiness for competition, and they practice highly developed mental strategies for managing their performance.  In specific, elite athletes meticulously set goals; use imagery; develop competition routines and refocusing plans; practice mental skills to the point of automaticity; and employ competitive simulation (i.e., their practice prepares them to compete).  In addition, elite athletes use thought control strategies; develop arousal management techniques; manage and interpret anxiety to facilitate performance; and utilize attention control.

Recognizing these patterns of thought and behavior in the most elite athletes leads us to explore how we can apply these same skills to more novice performers.  As you might expect, it has been repeatedly observed that utilizing these and other strategies increases motivation, performance, and commitment across all sports, ages and levels of ability.  In these articles I will focus on general factors associated with the mental aspects of sport performance.  I will summarize and set the stage for upcoming articles that will more specifically address three levels of sport performance enhancement.  These articles will conclude with a brief assessment intended to help you reflect on where you could benefit from mental preparation as a means of improving your game.  It is my goal that by reading these articles and utilizing the assessment tools you will be able to formulate some techniques that assist your game, as well as broaden your focus to continually self-assess your mental development.

Editor’s Note:  Dan Zimet PhD has given us an opportunity to learn and grow.  Dr Zimet will provide more articles in the future, for members of the World Players of Handball.  Stay tuned for the next edition!